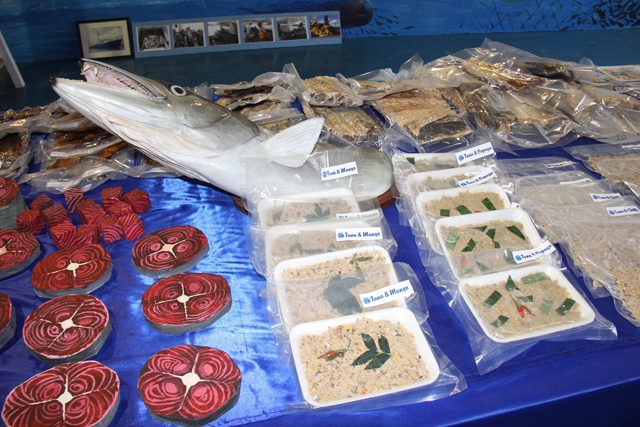 Products of a Seychellois owned company Amirante Fisheries made from by-catch from the tuna canning industry. The owner of the business has started to network with African countries to promote the exportation of the different processed fish products. (Patrick Joubert, Seychelles News Agency)

The island nation wants to emulate countries like Singapore which is today the centre in Asia for trading in commodities globally.

After taking steps to promote the blue economy concept on the international scene, Seychelles is now looking at bringing African nations together through trade.

Speaking to the press at a meeting dubbed the ‘African Prosperity conference’ that is being hosted by the island nation since Tuesday, the Chairman of the Seychelles Chamber of Commerce and Industry, (SCCI) Marco Francis called for greater partnership between African nations.

Francis noted that today trade between African countries stands at only 16 percent while the majority of the continent’s imports are from European and Asian countries.

As part of efforts to boost regional trade, leaders from 26 African countries joined together in June this year to sign an ambitious declaration in Sharm El Sheikh, Egypt to establish a wide-reaching free-trade zone across almost the entire eastern half of the African continent.

The Tripartite Free Trade Agreement (TFTA), which incorporates member countries from the East African Community (EAC), the Common Market for Eastern and Southern Africa (COMESA) and the Southern African Development Community (SADC), will stretch from the southernmost tip of the continent to the northernmost country of Egypt.

Seychelles was also among the countries that signed the agreement which is aiming to ease trade between African nations.

In the case of the Indian Ocean archipelago for example, the biggest trading partner is France, with trade figures amounting to just under a billion Seychelles rupees ($76 million) of imports and SCR 1.6 billion ($127 million) of exports in 2012.

Although Seychelles regional imports to COMESA, SADC and the Indian Ocean Commission (IOC) totalled a substantial 2.8 billion Seychelles rupees ($214 million) in 2012, this was offset by weak reciprocal exports of only SCR50.2 million ($3.8 million) with Seychelles’ regional neighbours in 2012, indicating that much more can still be done to promote the exportation of Seychelles’ goods to other African countries.

Francis noted that some of the goods that African countries are buying from European and Asian countries are readily available on the African continent adding that not buying directly from those neighbouring countries means more money is being spent.

“We need to remove all of those barriers. Some of the barriers are air access, vessel infrastructure to transport containers etc..These are what we need to develop to make it easier to import within Africa instead of other countries,” explains Francis.

Another barrier impeding cross-border trade between African countries relates to prohibitive visa rules and air links that often restrict the movement of businessmen to establish partnerships in neighbouring states. The subject has been proposed to the African Union (AU) and further to that the conference will feature discussions on the matter with the organisation.

“We believe that through trade Africa can be united because through trade we are speaking the same language. Trade does not include ethnicity, religion and race division; in trade there is only one language; profitability,” added Francis.

The president of the Tanzanian Chamber of Commerce, Industry and Agriculture, Peter Chisawillo, says he is fascinated by the speed of Seychelles' economic growth and is keen to look into areas of cooperation between the two countries.

“I see great business opportunities in Seychelles, for example tourism. In my country people do not recognise Seychelles as tourism destination,” says Chisawillo adding that exploiting and retaining wealth is also key for the development of the African continent.

SNA also spoke to a local businessman James Lesperance, owner of Amirantes Fisheries, about how he sees trade with Africa.

“Africa has a lot of potential. I have already started to do business with some Africa countries within my fish processing company. My target is to offer them a more competitive price compared to other Asian markets. All African countries have their riches but we need to cut the processing and transportation costs, so as to facilitate the trading process,” says Lesperance.

The Africa Prosperity Conference which is coming to an end today is being organized under the umbrella of Pan African Chamber of Commerce and Industry (PACCI). This is a network of 34 national chambers of commerce of Africa established in 2009.

The conference has focussed mainly on exploring and growing potential exports from African countries while ensuring that there is access to essential information on the Continental Free Trade Area.