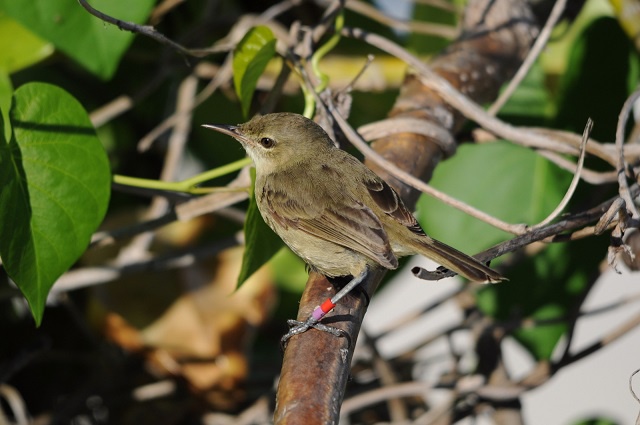 The Seychelles Warbler is no longer on the brink of extinction now that its population stands at 3,000 and the species has been downlisted to Near Threatened from the Critically endangered category on the IUCN's red list. (Nature Seychelles)

(Seychelles News Agency) - Once down to a mere 26, the population of the Seychelles Warbler now stands at 3,000 mature individuals leading to efforts preventing its extinction being hailed a ‘conservation success.’

The Seychelles warbler (Acrocephalus sechellensis) has been downlisted from Critically Endangered to Near Threatened on the International Union for Conservation of Nature, IUCN's red List of threatened species.

The new status also means that the small dull olive-and-brown coloured bird, with pale, buffish-yellow underparts and obscure, buff eyebrow-stripe, has also been removed from BirdLife International’s Endangered Birds of the World list.

“As far as I know, this is the first time in the world that a species once on the brink of extinction has now been down listed to the lowest category on the Red List solely because of conservation action,” says Dr Nirmal Jivan Shah, the Chief Executive of Nature Seychelles.

Efforts to increase the bird’s population started way back in the 1960s after the endemic bird became one of the most threatened species in the world.

Cousin Island special reserve located off the west coast of the Seychelles second most populated island of Praslin and managed by local non-governmental organisation Nature Seychelles, was the sole remaining habitat of the Warblers at the time.

It was back then, in 1968, that the island was purchased by one of the world’s largest nature conservation charities, the International Council for Bird Protection [known today as BirdLife International) with the main purpose of saving the Seychelles Warbler.

At the time, Cousin was a coconut plantation and the 26 surviving warblers could be found in the islands’ original habitat of mangroves.

The task had to start with reverting Cousin back to its original state before it was cleared of its natural plant species and replaced with coconuts for commercial purposes; and this slowly led to an increase in the bird’s population.

With a stable population on Cousin by 1990 it was decided that it would be a good idea to establish the Warblers' population on other islands. Translocation of the birds to Aride, Cousine, Denis and Frégate islands between 1990 to 2011 is what has contributed to the 115 times increase in the bird's population compared to what it was almost 50 years ago.

Nature Seychelles and BirdLife International have received the help and support of various local and international partners over the years to get the Warblers population to stand at 3,000 and rising today.

Frégate was the last among the four islands where 59 birds were transferred from Cousin in December 2011 which saw the population increase to 80 by late 2014.

“This is a huge success for us and proof that our work in conservation is instrumental in keeping Seychelles at the head of the environmental race,” Shah told SNA in an emailed statement.

With the species considered to be safe from the threat of extinction, there are no solid plans for translocation to other islands at this time.

“The Warbler’s status will keep on improving, since the potential on Denis island is at least 2000 birds,” Shah told SNA adding that he is confident that at some point the bird will be taken off the IUCN’s red list.

Conservation efforts involving intensive research, monitoring and habitat rehabilitation are also ongoing to improve the red list status of other Seychelles birds among which the Seychelles Magpie Robin, Fody and Paradise Flycatcher.