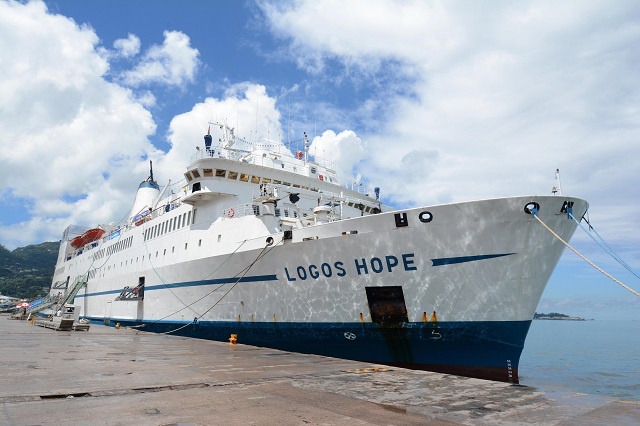 The Logos Hope is on a one year tour in Africa and Seychelles is the first stop. (Patrick Joubert, Seychelles News Agency)

(Seychelles News Agency) - Book lovers in Seychelles are not missing out on the opportunity to stock up on literature now that they can choose from over 5,000 titles while visiting the World’s largest floating book fair, the 'Logos Hope' which docked in the island nations Port Capital of Victoria, Friday afternoon.

Eager and excited children and adults were seen heading to the port Saturday afternoon, the first day the floating library opened its doors to the public.

Cookbooks, novels, children’s book, Bibles and other Christian literature are only some of the sections in which the stock of more than 500 thousand books have been divided on the ship.

“There are many books for the kids, and I also loved the cookery books that are selling at very low prices. I bought a lot…I came early, so I didn't have to wait for a long time,” Louisianne, a lady in her 40s told SNA.

Although Logos [Greek translation for “the word”] Hope will remain open to the public for five days until Wednesday, November 25, many people chose to visit the ship on the very first day.

“I came at around noon there was a long queue, but it did not take long to get onboard once people started going in….I spent almost an hour inside, and it is very interesting, quite spacious and I bought books related to life stories and geography,” said 15-year-old Arena.

Cookery and children books appear to be among the favourites of the Seychellois public.

“There is a variety of books, but I bought mostly for my child. The prices are good, and you have a choice. We have books available from local stores but on Logos Hope it’s way cheaper,” said another lady in her early 20s.

“I am going inside with an open mind. I am a teacher and a book lover, so I will go for anything that interests me but perhaps will go for books that I can also read in class with my pupils,” said an eager Rebecca as she made her way to the ship.

While this is the first time 'Logos Hope' is visiting the Indian Ocean archipelago of 115 islands with a population of around 93,000 , it is not the first time people in Seychelles have experienced shopping for literature onboard a floating library.

The 'Doulos' was however decommissioned and sold at the end of 2009 to a Singaporean businessman who very recently had the ship towed up on land where it is used as a conference centre.

Both ships belong to a German-based non-profit organization Gute Bücher für Alle (GBA Ships) or 'Good Books for all' in English.

Originally built as a passenger ship in 1973 'Logos Hope' was purchased by GBA Ships in 2004 and underwent some transformation ahead of starting its new journey as the world’s largest floating library in 2009.

While selling books is one of the main attraction, the ship is also on a mission to bring knowledge, help and hope wherever it docks.

“Very clearly the books is the knowledge bit, but also the educational events that we have onboard…Help - we have practical initiatives where we go to areas that are financially not good, and people are struggling we do that through various initiatives…Hope is, of course, all of us onboard are Christians, and we have a relationship with God. Our goal is to share this transformation we have experienced in our lives with the people that come onboard,” the Managing Director of Logos Hope South African Seelan Govender who has been working with GBA ships for over 15 years told SNA.

Currently, there are some 400 volunteers of around 60 nationalities on the vessel; most of the volunteers are between 18 to 25 years old, and they normally spend around 1 or two years travelling to different countries onboard the ship of 132.5 metres in length with nine decks.

“Right now I am working as an events coordinator organizing events we have onboard….but my first year onboard I worked in the hotel department, which is the cleaning department,” 21-year-old Monica Patino from Ecuador told SNA.

“It is a really intense life…because it’s always busy, sometimes you miss the people back home but we can talk to them on Facebook...It’s really rewarding.”

Interestingly the full-time volunteers who discharge various functions, from being part of the ships maintenance, library, sailing crew, medical team and even part the floating school onboard the ship that caters for volunteers with children, they all have sponsors at home who pay for their daily needs.

“I come from Australia….since 2000 I’ve come with my family to the ship for short periods of time until our three daughters were grown up they are all in Australia now me and my wife have come for a longer time three years this time,” Mathew Hodge the Medical Doctor onboard who has also worked on Doulos, told SNA.

“I can see that God is doing some good things through the ship …my role as the Doctor is to help support them providing healthcare on the ship….”

For Hodge, the most important characteristic for one to be a volunteer on the ship although they receive some form of formal training, is to have a strong faith in Christ, know him personally and want to be involved in what God is doing in different parts of the World.

While there are no full-time Seychellois volunteers on the 'Logos Hope' the ship has been able to attract some 24 Seychellois nationals to help out during its visit to the island nation.

Verbeek who hails from the Netherlands serves as relief captain of 'Logos Hope' for short periods although together with his wife Carla, they have been volunteering with GBA ships since 1981.

For the six days they will be in Seychelles, the volunteers will also be sent out to engage with civic organizations such as the churches, hospitals, prison, orphanages, etc… and will also have cultural other events onboard for people of all age groups.

“We don’t come as tourists in the Seychelles. We come as a community to serve. We don’t only want to enjoy the richness of the beauty of Seychelles, but we are here for the people of Seychelles, “says Sander de Laat the Project Manger of Logos Hope.”

“We have space to host up to 900 people on board the Logos Hope, so this is the number we allow at any given time. In other countries, we have had up to 28.000 visitors a day, and so we would allow at least that many people aboard.”

Logos has also partnered with local telecommunication service provider, Cable and Wireless Seychelles to cater for visits of children from Seychelles orphanages as well as to provide free internet facilities to the crew of 'Logos Hope' a gesture worth some $3,470.

From today until Wednesday November 25 the ship will be open from 10 am to 9.30 pm local time and access to the book fair costs less than a dollar for everyone who is 12 years and above while books are on sale for as low as $1.90 dollar.

Logos Hope’s voyage to Seychelles was a six-day sail from their last destination; Sri Lanka. Seychelles is also the initial stop as the ship undertakes its first visit to the Southern hemisphere

According to Govender, the Africa tour will last nearly a year.

Through its ships, GBA has made over 1400 port calls since 1970 visiting more than 160 countries and allowing over 40 million people on board.

Logos Hope is the sole remaining floating library, although the organization have had four ships since GBA started its operations in 1970.

According to the ship's Project Manager, Sander de Laat, the sale of books covers only 25 percent of the ship’s operation cost, and the rest of the funding needed comes from sponsors.