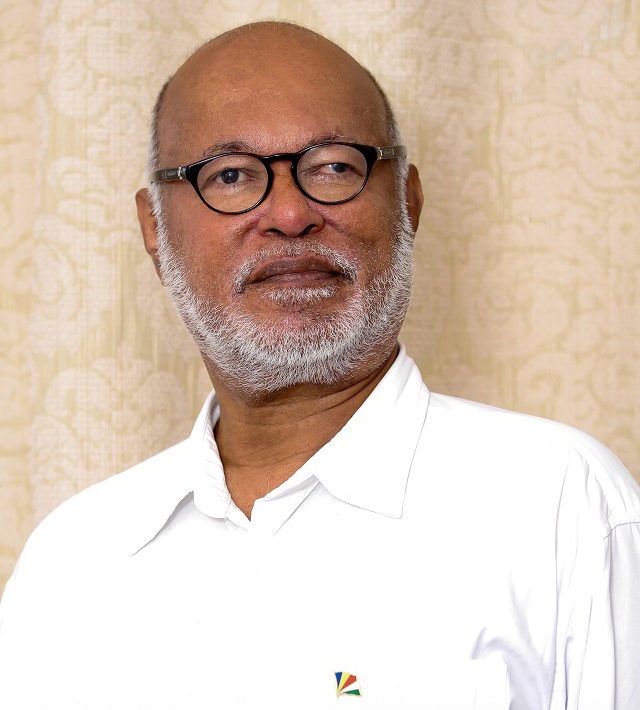 While some have been on the political scene for decades there are also some newcomers this year.

It is the first time in the island nation’s political history that a record number of six candidates will by vying for the office of President.

Another first for Seychelles is a female presidential candidate.

As the time draws near for the 70, 943 eligible Seychellois voters to be called to the polls, SNA will be catching up with the presidential candidates in no particular order. The only candidate who will not be featured is the Independent candidate Philippe Boullé who has indicated that is not available for an interview due to his tight schedule.

In this first interview the ‘Lalyans Seselwa’ candidate Patrick Pillay talks about the way he sees the political landscape, his proposal to the Seychellois electorate as well as his expectations and prediction of the results.

Pillay is a former high-ranking figure within the ‘Parti Lepep’ [the ruling People’s Party], having served in various ministerial and ambassadorial posts for over 20 years including as the island’s Minister for Foreign Affairs from 2005 to 2010 and Seychelles High Commissioner to the UK until 2012, when he retired.

He announced the formation of his own party in April with the help of several former government ministers. The party was launched officially in May.

PP: Firstly, I am happy to see that the Seychellois voters are mindful of their civic duty. The people of Seychelles are keen to take part in the elections, and I believe that this year the voter turnout will be higher than last time [in 2011] because the majority of the people would like to see a change. It’s natural, and this is not only happening in Seychelles, when you have a party that has remained in power for so long, it is normal for people to desire change.

PP: What ‘Lalyans Seselwa’ [the Seychellois Alliance] is offering is good governance. I think that the government in power has lost credibility, respect and popularity. There are many individuals within the ranks of ‘Parti Lepep’ [the ruling People’s party] who are doing a good job and who are honest like in many governments. Unfortunately, many have abused their authority.

Seychelles has made enormous losses as a result of corruption, and the economy has suffered, this has helped to increase the gap between the rich and the poor. According to the World Bank, Seychelles has largest social divide in the world. As ‘Lalyans Seselwa’ our strength is good governance, to ensure that there is transparency and that people do not turn to corruption to enrich themselves.

As soon as we are in power, we will have an audit to find out where they have stashed all the money. I do not want to put anyone in jail, but only ask that they give back to Caesar what is Caesar's, and give back what is owed to Seychelles.

SNA: What will be your asset [in terms of your proposal] as you go into this election?

PP: To fight against corruption.

SNA: Can the multitude of candidates obstruct the chances of the opposition in the elections?

PP: I believe that there are two camps and six candidates going into the elections.

There are five candidates [from five political parties] and an independent candidate with four parties wanting the same thing; to remove the ruling party from power.

On the other hand, we have ‘Parti Lepep’ that has been in power for 38 years and which the opposition would like to see removed.

Personally, I do not see the elections heading into a second round….President Michel has said that there will be no second round as he will be going for a knockout [in the first round].

I also do not foresee a second round, as it is President Michel who will be knocked out.

SNA: Are you ready to form an alliance in the event there is a second round?

PP: All of the opposition parties have agreed that if ever there is a second round, although I do not believe this will be the case, the opposition will unite to take out the ruling party that has brought about poverty in the country…Yes we agree to form an alliance.

SNA: Why decide to return to politics after you had already gone into retirement?

PP: I must clarify this point, when I was a professional working in the field of education, during the one-party state from 1977 to 1992, I was never a member of any political party nor the SPPF [Seychelles Peoples Progressive Front now Parti Lepep]. In 1992, the SPPF invited me to become one of its members ... at that time I believed that the SPPF was close to my own values, that is to say, equal opportunities for everyone, social justice, no discrimination, etc. But progressively, I found that these values have been flouted, and our society has become very elitist, and I am against elitism, and that is why we must put our country back on a track to where there is social justice, where those who do not have the means receive assistance and not have only a small group of people who are only thinking about filling their own pockets.

SNA: Do you think you have been able to gather enough supporters to win the elections over the past six months since your party was launched in May?

PP: I believe that we have more than 25,000 supporters and even more than 30,000 ... I am also more than 150 percent convinced that ‘Lalyans Seselwa’ will win the elections, not because I want to become president or to brag, but because I am realistic ... You know, there are many people in the public service, who support us [Lalyans Seselwa] but are afraid to come forward. I was just now at a funeral, and you'd be surprised at the number of people who discreetly came up to tell me that they are with us ... I am sure that on December 5, we will celebrate the victory.

PP: I have not been following the discussions [on Social media] because I am more literary, but from what the party members have told me, there are many insults geared towards me... but all of this do not worry me.

SNA: The image of being a former member of the ruling party, could this be a disservice to you?

PP: No, because I've always said that I am not ashamed of having worked in several [government] ministries ... as a professional working for Seychelles. However, I am ashamed of my colleagues who are corrupt, who victimise others and who lie, which I did not know about.

For example all this money that have been diverted to private accounts; when I was a minister, I was not aware of all that, because I thought the values I was defending were also being defended by the other ministers and it is only later that I discovered what was going on.

SNA: So what is your prediction for the upcoming presidential elections?

PP: Definitely ‘Lalyans Seselwa’ will come out first, followed by SNP, third will be ‘Parti Lepep’, and fourth will be Mrs Antao [Alexia Amesbury] and if you pay attention Mrs Antao may even come out ahead of ‘Parti Lepep’.