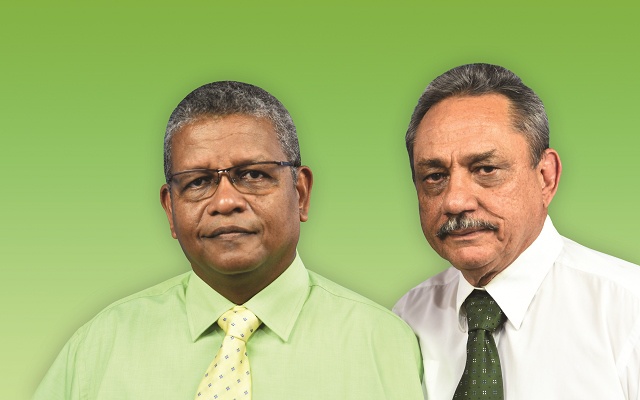 The leader of the SNP Wavel Ramkalawan (left) pictured with his running mate for the 2015 presidential election in Seychelles Roger Mancienne. (Seychelles National Party)

Ramkalawan is presenting his candidacy for the fifth time this year, having stood in presidential elections in 1998, 2001, 2006 and 2011.

The 54-year-old Anglican priest has been at the helm of the SNP since the party was formed in 1998, succeeding his United Opposition party.

A record of six candidates including the first female candidate will be going head on in the Seychelles Presidential race from December 3 to 5, 2015.

As the time draws near for the 70, 943 eligible Seychellois voters to be called to the polls, SNA catches up with the SNP leader as part of a series of interviews with the presidential candidates, in no particular order.

Wavel Ramkalawan talks about the way he sees the political landscape, his proposal to the Seychellois electorate as well as his expectations and prediction of the results.

SNA: This is your fifth participation in a Seychelles presidential elections - what is your approach this time around and how would you describe the process so far?

WR: There is an entirely different atmosphere for this election compared to previous elections where we’ve had around three candidates ... Normally things are between two candidates, but the implosion within Parti Lepep [the ruling People’s Party] has resulted in a new dynamism with two major political parties and a third one that is conquering supporters of Parti Lepep and some supporters of the SNP, which gives people more choice.

But I also feel that there is a new hope among the people who make up the traditional opposition and also for the people who have left Parti Lepep, who now consider themselves to be part of the opposition.

For the first time, there is talk of a second round, this issue had never arisen before. ... The political atmosphere is entirely different.

WR: Our number one priority is to eliminate heroin. Then comes the cost of living, education, corruption, but if we do not solve this problem, it will be the end of our society.

SNA: Can the multitude of candidates hinder the chances of the opposition in the upcoming elections?

WR: There are different ways of seeing things, I do not believe that the opposition contesting individually is necessarily a weakness, and it should be noted that the opposition parties have already said that they will support the candidate who comes out ahead in the election. We must also be careful not to have a scenario where the two opposition parties come out ahead; then we will have to see what strategy to adopt.

And it is also possible that the second round will be contested by two opposition candidates.

SNA: What is the highlight [in terms of your proposal] as you go into this election?

WR: For us one thing that is important is Seychelles and the Seychellois people.

But what is important to us is that we are focusing on our future so that our young people can have a good future ... we have to move away from personal attacks... In all our publications, we have decided not to make any personal attacks, even against President Michel. What we are proposing is a program that involves all Seychellois.

SNA: Why is it that you are presenting yourself as a candidate for these elections - After four failed attempts wasn't it time to let someone else take over?

WR: I do not see my previous participation as a defeat...

Looking back, I started off too early and too young, because there was no leader, we had just moved away from the one party state, and everybody were afraid. When the executive committee proposed [that I be the presidential candidate] I accepted because I saw that there are many young people who can take over but they are too young, and I do not want to see them ‘jump in at the deep end’ as was the case for me.

And today I feel more mature with experience, together with Roger [Mancienne – his running mate] we will be able to lead this country and also build the party leadership that will eventually take over.

SNA: How have your supports reacted vis-à-vis your return to the political scene after choosing to boycott the last parliamentary elections in 2011?

I believe that our supporters are really happy to see that we are back... people have regained their strength, that is why I believe we will succeed in the coming election.

WR: Sad! There is a group ‘Dan Lari Bazar’ [Facebook group in Seychelles] which denigrates people saying almost anything…and to think that this is tolerated and after that their leaders in the National Assembly presented a motion that speaks of tolerance, peace and respect. For me, it is sad. But there are other opposition supporters who have openly engaged in such kind of attack. It's a shame.

People are very excited and are doing all sorts of things.

SNA: As this is your fifth participation, what makes you confident you'll win this time round?

WR: The Seychellois people have realized that ever since I joined politics, what I have always said about the development of our country remains the same; relating to the accusations directed at the government.

Today people are hearing former ministers confirm what we have been saying all along, I hope that people understand that we are not engaging in populism...When we talk about corruption, money that have gone missing; ‘Lalyans Seselwa’ and some former ministers have said that 50 million [dollars] is missing, people are now saying that what we said was true…

I am calmer and more mature this is what will make people choose me.

SNA: You recently proposed an alliance for the upcoming election - do you believe that victory is possible for one of the opposition parties without this alliance?

SNA: What are your predictions for this election?