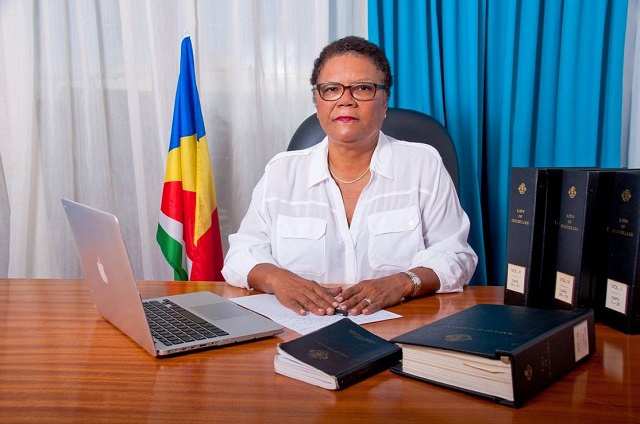 Alexia Amesbury, Seychellois lawyer and leader of the 'Seychelles Party for Social Justice and Democracy' (SPSJD) is the first female presidential candidate in the island nation. (Alexia Amesbury)

(Seychelles News Agency) - The Seychelles presidential elections to be held from December 3 to 5, 2015 will for the first time be contested by a female candidate.

Alexia Amesbury, a 64-year-old Seychellois lawyer is quite new on the political scene having launched her "Seychelles Party for Social Justice and Democracy" (SPSJD) in May this year.

Amesbury who says her party’s manifesto is about 'putting the Seychellois people first' will be among the record number of six candidates contesting the presidential race.

As the time draws near for the almost 71 thousand eligible Seychellois voters to be called to the polls, SNA catches up with Amesbury as part of a series of interviews featuring the presidential candidates in no particular order.

Alexia Amesbury talks about the way she sees the political landscape, her proposal to the Seychellois electorate as well as her expectations and prediction of the results.

AA: This presidential election has opened my eyes to so many things. There are things that I had heard about in the past but had very little knowledge of the real situation….but now through my interaction with the electorate, I have realized that even though we have had a multi-party democracy in place for more than 22 years, there is this fear that exists within the Seychellois people.

Even if on paper they say that we have a democracy; for me democracy is not supposed to instill the kind of fear that I have observed during the past few months that I have been interacting with the public...This is how I feel about the upcoming elections.

AA: I was the first candidate to launch my party’s manifesto titled ‘The Seychellois is Supreme’.

The reason for such a focus is because I have realized that the Seychellois people are treated as second class citizens in their own country… all of the areas where opportunities exist to make real money, for example fisheries…are not in the hands of the Seychellois.

Those Seychellois who are involved in fisheries, maybe the 2 to 4 percent of them, are the elites. They are the ones who control the sector, and the money that the sector is generating…the larger proportion of the Seychellois nation has not yet benefited from this money.

If for example…the EU [European Union] is solely giving Seychelles 10 million euros per year as payment for the right to fish in our EEZ [Exclusive Economic Zone], when I think about it, 10 million euros is equivalent to 150 million Seychelles rupees, I ask myself why is it that the people of Seychelles are still living in this type of extreme poverty?

SNA: What is the highlight of your Manifesto?

AA: There are many things I would like to achieve but at the same time the most important thing I want to tackle is to eliminate poverty and put money into the hands of the Seychellois people and allow them to have a better standard of living….for now, 60 percent of our population are living below the poverty line. This percentage is shocking…it’s too high…this means the Seychellois people are working to pay bills…so for me this is the main issue I want to tackle; poverty.

SNA: Can the multitude of candidates obstruct your chances or that of any of the opposition parties in the elections?

AA: What I see is that the Seychellois people are determined to remove this government from power…our first target is to make sure that President Michel and its ruling ‘Parti Lepep’ [The Peoples Party], does not get 50 percent of the votes. The only way to make sure that this happens is to have one or two or three opposition parties, with each party taking away supporters from ‘Parti Lepep’…Maybe in the past we had only one opposition party…maybe that one party could not do this on its own…but now we have many [opposition parties] to do the work and remove the ruling party from power.

SNA: The Seychelles National Party, also an opposition party proposed an alliance recently - Why did you decide not to accept?

Unfortunately, it is not possible at this moment…however, we have agreed that if the election goes into a second round then definitely the opposition party that wins the most votes will be backed by the other opposition parties.

SNA: You are the first woman in the Seychelles political history to contest a presidential election – why venture into politics and what has been the reaction of the general public who are used to having men as their political leaders?

AA: Frankly, when you hear the name ‘President’ the word itself is gender neutral, it does not tell you if it is male or female. So, I am not thinking about becoming the first woman [president], but I am thinking about the candidate who has the qualities of a leader, who truly has the interest of its people and country at heart.

For me, the number one quality is honesty. In this day and age in Seychelles, the many allegations being raised with regards to corruption… has made the Seychellois people realize that we no longer have a government that is honest.

The second quality is integrity…again through my interaction with the public, I have realized that we do not have a government that has integrity…because if you have integrity, you will never do something that is not in the best interest of the people…Equally you need to have compassion…you need to see yourself discharging the role of a father to your country.

I remember very well the words of President Michel in the televised program [aired by the national television SBC] ‘En Moman Avek Prezidan’ [A moment with the president], when the journalist told him that people are complaining about the recent salary increase approved for his ministers and members of parliament, while the Seychellois people did not get any salary increase, the president replied that ‘when the economic situation permits, the people of Seychelles will get a better salary.’

The question I asked then was if you are a father, you only have one plate of food, do you eat first or let your children eat first? ….What we are seeing is that Seychellois workers have become poorer while some people in the government have become wealthy thanks to the sweat and tears of the Seychellois people.

SNA: Do you think you have been able to gather enough supporters to win the elections over the past six months since your party was launched in May?

I am surprised to see the amount and quality of support I am getting. I am very much aware that I have not gone on television yet to organize a big rally, and that is why maybe some people think I do not have any support.

For me, this is a strategy because what I am seeing is that people who have been seen in a large crowd [attending a political gathering] have been victimized, and I do not want anybody giving me their support to be victimized in the same way that such is happening now for the elections.

SNA: What are your predictions for this election?

AA: In this election the only thing I can predict with certainty is that we are going to say goodbye to ‘Parti Lepep’…the rest is up to the people.

SNA: Are you ready to form an alliance in the event there is a second round?