Jackfruit – Could it help feed the planet? 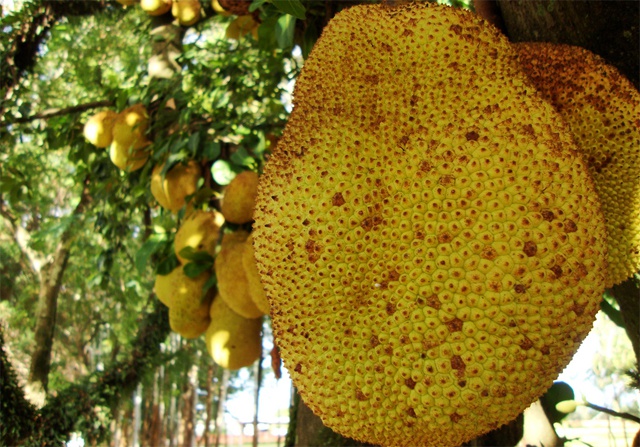 (Seychelles News Agency) - In the wake of food insecurity brought about by climate change, scientists are scrambling to find alternative crops that could help to feed the planet, and their focus in recent weeks has turned to the humble jackfruit.

According to an article in The Guardian newspaper, food security experts think the world’s largest treeborne fruit, which has the smell of rotting onions and originated in India but can be found throughout Asia, East Africa and even South America, could soon be utilised in new ways to replace diminishing stocks of wheat, corn and other staple crops.

This comes after alarm bells sounded by the Intergovernmental Panel on Climate Change's (IPCC) fifth assessment, which led to fears that in the next few decades, food security could become so threatened in certain areas of the world that it could lead to food wars. Enter the jackfruit, a superfood that is high in protein, Vitamin C, potassium, Vitamin B6, calcium and iron and low in sugar and cholesterol.

The Seychelles islands in the Indian Ocean are no stranger to the jackfruit, and hundreds of large jackfruit trees can be found all over the main inhabited islands of Mahé, Praslin and La Digue. The fruit forms an important part of local traditional culture and cuisine and it is almost too easy to grow. Shrugging off potential threats such as pests, diseases, drought, flooding and high temperatures, jackfruit trees can produce hundreds of fruits per year, ranging in weight from 5kg to 45kg each.

"It's a miracle. It can provide so many nutrients and calories – everything," said Shyamala Reddy, a biotechnology researcher at the University of Agriculture Sciences in Bangalore, India. "If you just eat 10 or 12 bulbs of this fruit, you don't need food for another half a day."

In India, the fruit has long been neglected as a useful food source and is now regarded as a “poor man’s fruit”, with food suppliers and consumers alike opting for more commercialized fruits such as apples and oranges.

But Nyree Zerega, a researcher on plant biology at the Chicago Botanic Garden, says the jackfruit’s bad reputation is undeserved.

"I think it could play a much more important role in diets than it currently does and be a staple," she said. "In addition to consuming cooked young jackfruit, ripe jackfruit, and jackfruit seeds, there are also many food products with longer shelf life that can be made from jackfruit."

The Indian government has already launched some new initiatives to promote the jackfruit by promoting new uses for the fruit as a canned product and also as an ingredient for processed foods.

In a world where farmers have widely adopted genetically-modified crops of rice, wheat and maize to produce bumper crops, a healthier and less controversial alternative could be the jackfruit tree, especially in developing countries with growing populations living under the increased threat of climate change.