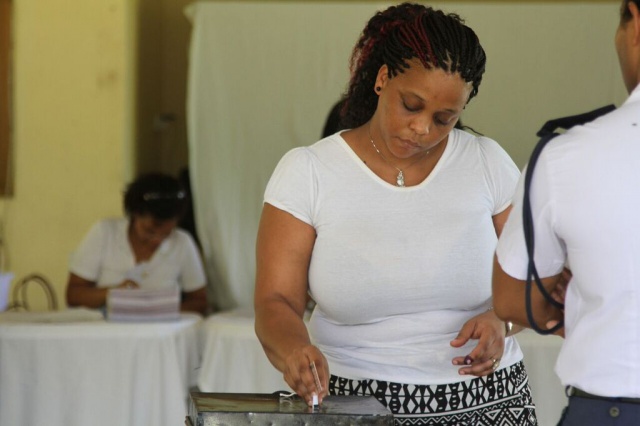 The majority of Seychellois voters will cast their ballots on the three main inhabited islands on Saturday. (Seychelles News Agency)

(Seychelles News Agency) - After voting held on a number of Seychelles' outer islands and at special stations set up mainly on Mahé and Praslin over the last two days, Saturday will see the majority of Seychellois voters head to the polls.

Eligible voters will be choosing among six candidates seeking to be elected for a five-year term at the helm of the western Indian Ocean island’s government.

Saturday December 5, is the main voting day in the 25 electoral areas on the three largest inhabited islands of Mahé, Praslin and La Digue.

The largest number of voters this year, 4,082 are registered in the Anse Etoile district in the northern part of Mahé, while the western coast district of Port Glaud is the smallest electoral area with 1,910 eligible voters registered.

All voting stations will open at 7 am local and will close at 7 pm the same day.

According to the Electoral Commission everything is ready for the process.

“We are ready for tomorrow morning, at around 4.30 am [local time on Saturday] our officers will be arriving at the headquarters [of the Electoral Commission in the capital, Victoria] and with the help of the escorts we will move to the electoral districts,” the Chief Electoral Officer Charles Morin said in an interview this afternoon.

Officers going to work on Praslin and La Digue have already left for the second and third largest inhabited islands respectively, to ensure that there is no delay in reaching the two islands.

Nearly 71 thousand eligible electorates can vote in this year’s presidential election in Seychelles.

A number of them have already cast their ballots today and yesterday at the special stations established on the Mahé, Praslin and Silhouette as well as some of the outer islands.

According to the Electoral Commission some 4 thousand people were eligible to vote on the first two days, although it has not been confirmed to the media how many have actually cast their votes on Thursday and Friday.

Yesterday, the Electoral Commission had estimated that around 1,600 people had voted on the first day.

Three flights departed the archipelago’s main island of Mahé early this morning to bring electoral officers, the police and the candidates’ representatives to the various islands with votes starting as early as 8.45 am local time on Bird island, located some 100 kilometres from the main island of Mahé.

All voting on this second day ended at 3.00 pm with the last of the voters casting their ballots on Fregate island, located 55 kilometres east of the Seychelles’ most populated island of Mahé.

According to Morin, all ballot boxes from the islands are already in and are being securely kept at the Electoral Commission’s Headquarters.

Until late this evening the Electoral Commission was still sorting out [according to the electoral areas] the votes cast at the various special stations today and yesterday, so that these can be dispatched to the respective districts tomorrow to be included with other votes that will be cast on the main polling day.

The process is being observed by representatives of the candidates as well as members of local and international observer missions.

Commenting on some issues that has arisen over the past two days including concerns over the use of markers instead of ink to indicate whether someone has already voted Morin explained that it is safer to bring markers to the outer islands to avoid any spillage of ink on the ballot papers.

“As a precautionary measure we ensured that the marker we are using is the same as the ink we use on the main islands,” says Morin.

The Chief Electoral Officer also confirmed that an individual had tried to vote twice at the Ile Perseverance Special voting station but that this was prevented.

“This shows that we are on the alert, we are aware of what is happening....we have measures in place to ensure that people cannot vote more than once.”

According to Morin, the person will be dealt with according to the provisions of the Electoral Act.

The number of six candidates contesting the 2015 presidential poll is a record in Seychelles since the establishment of the third republic when the country adopted its current constitution in 1993.

Incumbent James Michel is seeking a third and final mandate and his opponents include three first timers David Pierre, Patrick Pillay and Alexia Amesbury also the first female presidential candidate, as well as two contenders who have stood a number of times; Wavel Ramkalawan and the sole independent candidate Philippe Boullé.