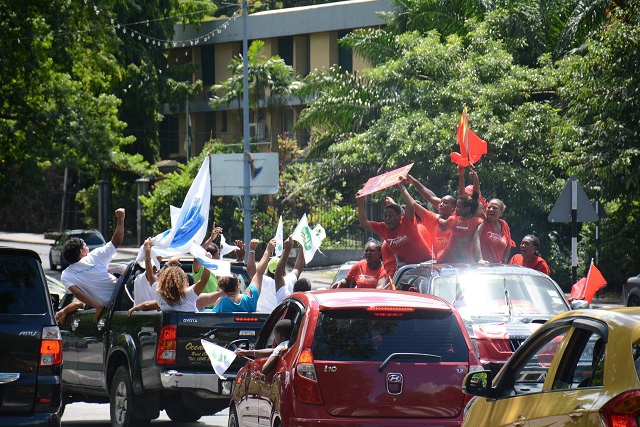 Supporters of both the ruling party and the opposition seen during motorcades held this Sunday. (Patrick Joubert, Seychelles News Agency)

(Seychelles News Agency) - Sunday December 6 in Seychelles, an Indian Ocean archipelago of 115 islands in the Western Indian Ocean saw supporters of political parties take to the streets following the announcement of the results of the presidential elections held in the island nation a few hours earlier.

While no candidate has won an absolute majority, the opposition side is celebrating the fact that their combined votes have prevented the incumbent president from winning the required 50 percent plus one vote in the first round and pushing the elections for the first time in Seychelles history to a second round.

The opposition supporters joining the celebrations were mainly those of the Seychelles National Party candidate Wavel Rankalawan, the ‘Lalyans Seselwa’ candidate Patrick Pillay and those of Alexcia Amesury the Seychelles Party for Social Justice and Democracy candidate.

As supporters of the opposition candidates dressed in their respective party gears waving their flags drove down the streets in a planned motorcade, supporters of the ruling ‘Parti Lepep’ could also be seen doing the same holding pictures of the incumbent James Michel and celebrating the fact that he won more votes in the election, although not an outright majority.

“I think the results are favourable… to go to a second round, it shows that the people of Seychelles want a change and they see that there are certain things that are not functioning properly in the country. I think our nation feels that if there is another leader he will make the difference we are expecting,” 50-year old Guy told SNA this morning.

“I am not worried about the results because I am sure that not all supporters of Mr. Pillay [Patrick Pillay Lalyans Seselwa Leader] will give SNP their votes. Parti Lepep will win [in the second round],” said 53-year old Jocelyn.

A total of 62,004 people voted in the first round of the Seychelles presidential elections out of 70, 943 eligible voters.

This puts the level of participation at 87.4 percent which is around two percent higher than the 85.3 percent recorded during the last presidential elections in 2011.

Following announcements of the results just before dawn this morning, the Seychelles Electoral Commission has updated results revising the previously indicated performance of the runner up, the Seychelles National Party Leader Wavel Ramkalawan and that of David Pierre, the leader of the Popular Democratic Movement.

A closer look at the results

Although he only won 47.76 percent of the votes failing to obtain the 50 percent plus one votes required for an outright majority, incumbent James Michel won the majority of the valid votes cast in 23 out of the 25 electoral areas spread across the three main inhabited islands of Mahé, Praslin and La Digue.

His highest win is 68.40 percent for the Inner Islands, one of 7 electoral areas where Michel managed to grab 50 percent or more of the votes.

The runner-up in the first round of this presidential elections in Seychelles, Wavel Ramkalawan, managed to obtain more votes than all his other opponents in 2 out of the 25 electoral areas; at St Louis where he obtained 46 percent of the valid votes and at Beau Vallon where he obtained 43 percent.

Many observers of the current political landscape in Seychelles, view the arrival of the Lalyans Seselwa party led by Patrick Pillay, a former high-ranking figure within the ruling ‘Parti Lepep’ as the destabilizing factor that has grabbed supporters from both the SNP and ‘Parti Lepep’ and led to the drop in the total number of votes obtained by both sides.

Boullé’s performance is less than his 956 or 1.66 percent performance obtained in May 2011.

Both Pierre and Boullé were absent at this morning’s announcement of the results.

Reactions of the candidates

The incumbent president James Michel has said that the ruling ‘Parti Lepep’ is still the main political force in the country even though they lacked the 2 percent that was needed to win the elections.

“We are ready to take part in the second round and we will ensure that we perform better than the first time, we will see the results in two weeks’ time….I was facing 5 opponents [in the first round] but now there will only be one opponent, we are going to work hard to do better,” said Michel addressing those present for the announcement of the results early this morning.

On the opposition side, Ramkalawan reiterated what some of the opposition candidates had already indicated before the elections that should there be a second round they would be ready to endorse whoever among them wins the most votes in the first round.

“We realize that in our country today, the opposition has the majority with 52 percent compared to the ruling party; 48percent, the second round will be a matter of all of us coming together and it will not be a question of one opponent against Mr Michel but an army against you,” said Ramkalawan.

For Alexcia Amesbury, Leader of the Seychelles Party for Social Justice and Democracy, also the first female candidate in a Seychelles presidential election who has won 803 valid votes or 1.33 percent the result of the election is “historic.”

Alexcia received the fourth largest number of votes for her first participation in a presidential election coming behind Lalyans Seselwa’s Patrick Pillay.

“We in the opposition will continue to fight to get where we want to go although I believe that it’s a journey which we need to reinforce our efforts to ensure that our children inherit a better Seychelles,” said Pillay.

The second round of voting is already set for Wednesday December 16 to Friday December 18, 2015, within 14 days as prescribed by the Elections Act.

The Electoral Commission will be meeting as early as tomorrow to draw lots for the order in which candidates will appear on the ballot paper for the second round as well as to discuss the modalities and schedule of party political broadcasts on radio and television.

The Chairman of the Electoral Commission, Hendrick Gappy has congratulated both the candidates and the voters for their cooperation, tolerance and conduct during the whole process.

“The Electoral Commission urges all voters to exercise their right and take their responsibility to participate fully in this second round which will see the election of the new President for the next five years. The EC also calls on all candidates, their representatives and agents to abide by the Shared Ethical Code of Conduct for this election,” reads a press statement issued by the electoral Commission this afternoon.

International and regional observer missions from the Commonwealth, African Union, Southern African Development Community (SADC), the Indian Ocean Commission and the Electoral Commission Forum alongside two local observer groups Citizens Democracy Watch Seychelles (CDWS) and the Association for Rights, Information and Democracy (Arid) have been monitoring the Seychelles electoral process over the past weeks.

They are all expected to present a preliminary report of their observation and findings on Monday.