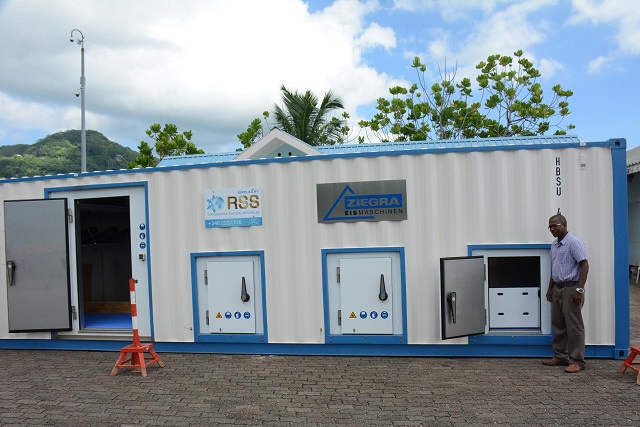 The chief executive of SFA, Vincent Lucas with one of the new ice plants ( Joena Bonnelame)

(Seychelles News Agency) - Fishermen in the Seychelles will soon benefit from an increase in the production of ice.

The Seychelles Fishing Authority (SFA) has purchased two new German-made ice plants, with each able to produce 10 tons of ice per day. The investment nearly doubles the ice production capacity in the country to 47 tons per day, officials say.

Seychelles, an island nation in the western Indian Ocean, has experienced industrial-level ice shortages in the past. Fishermen frequently expressed their frustrations.

The fishing industry is the second pillar of the economy of the archipelago. The Exclusive Economic Zone (EEZ) of the 115-islands state covers a vast 1.3 million square kilometers of blue, fish-rich ocean.

In an interview with SNA, the chairperson of the Seychelles Fishermen and Boat Owners Association, Keith Andre, said that fishermen have suffered in recent years.

“We fishermen found ourselves having to collaborate with companies that supply ice such as Oceana Fisheries and Sea Harvest in town. These companies expect [us] to sell them our fish so that they also make a profit,” he said.

Over a year ago the local company Oceana Fisheries was purchased by Russian entrepreneur Alexander Karmanov. Part of the sale agreement was a donation of two ice plants. The two plants have been installed at Baie Ste Anne on Praslin and Providence industrial estate on the eastern coast of Mahe.

Currently there are five ice plants in total on the country’s two most populated island -- Mahe and Praslin.

Three of the five ice plants use a type of refrigerant – R22 -- that has been banned because of its effect on greenhouse gases and global warming. Those plants must be upgraded.

One of the new ice plants is in the country and ready for installation. The second will be set up in the northern district of Bel Ombre. It is to arrive later this month.

The chief executive of SFA, Vincent Lucas, told journalists this week that the demand for ice in Bel Ombre has increased.

“The additional 10 tons will make a total of 15 which will be sufficient to meet the needs of the northern community,” he explained.

The two new ice plants should be operational by late January.

The government invested 625,000 US dollars to import and install the new containerized ice plants.

“These ice plants are new technology, and the ices are expected to be of higher quality than those we already have,” said Lucas.