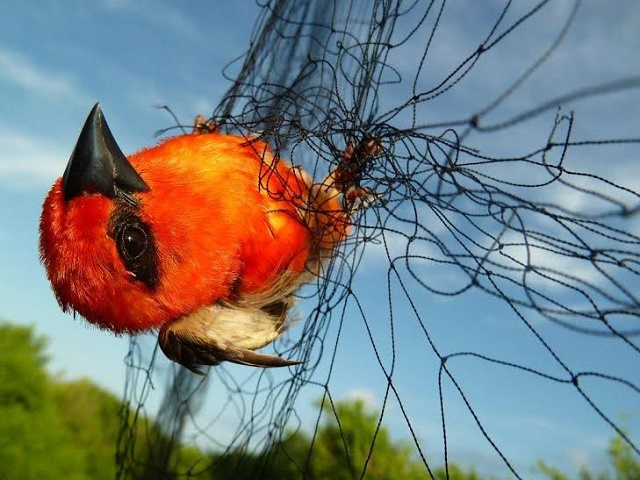 A Madagascar Fody in a mist net, which was the first method of capture at the beginning of the eradication (SIF)

A recent Seychelles Island Foundation survey has found no trace of the Madagascar Fody – also known as the red cardinal Fody – a foreign species often viewed as a pest that competes for food with native wildlife.

The Aldabra atoll is a UNESCO World Heritage Site and haven for bird life. It’s one of the many natural beauties the western Indian Ocean nation of the Seychelles boasts.

The November survey – conducted at the end of an eradication project against the Madagascar Fody -- didn’t find any evidence that the little red bird is present on Assumption, one of Seychelles’ outer islands.

Rowana Walton, a communications officer at the Seychelles Islands Foundation, told SNA in an interview on Monday that several months after the eradication project had started on Assumption Island the foundation’s staff found about a 100 Madagascar Fodies on Aldabra in an area not often visited.

“We found that the Madagascar Fody that had reached Aldabra had hybridized with the Aldabra Fody ... but luckily with doing the eradication on both Aldabra and Assumption we have now mitigated that threat” of cross-breeding, said Walton.

It is not known how the Madagascar Fody was introduced to the Seychelles. Its eradication will be confirmed only after more surveys are done in 2016.

The eradication programme, a European Union-funded project that began in 2012, appears to have eliminated two introduced species, the Madagascar Fody and the red whiskered bulbul.

The survey team of four did walking surveys across the island several times to ensure that they thoroughly covered it.

Walton said that Assumption is a large island with dense shrubs and that the terrain makes it difficult to locate small wildlife like the Madagascar Fody. Several more surveys need to take place in 2016 to ensure the complete eradication of the Madagascar Fody, Walton said.

“When we got down to the last bulbul, you are looking for one bulbul on a huge island,” Walton said. “It can be very difficult to narrow down the search. …We can't be 100 percent sure until we have done multiple surveys.”