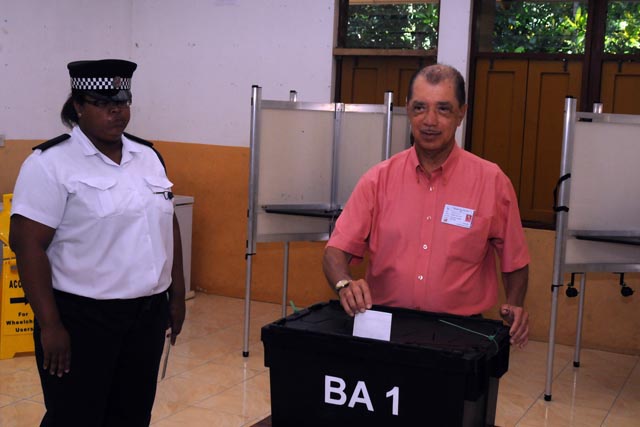 (Seychelles News Agency) - Seychelles’ incumbent President James Michel of the ruling 'Parti Lepep' [People's Party] voted this morning in the historic run-off presidential poll, as he seeks his third and final mandate at the helm of the island nation’s government.

The first round of voting earlier this month saw six candidates running for president but none received the required 50 percent to win an outright majority.

Michel was seen arriving at the Bel Eau primary school, serving as polling station for Bel Air, a central district of the main Seychelles island of Mahé at around 9.15 am local time.

He is facing former parliamentarian and leader of the Seychelles National Party Wavel Ramkalawan.

The two earned the most votes in the first round of voting, Michel with 47.76 percent and Ramkalawan with 35.33 percent.

Speaking to journalists after casting his ballot, Michel said he has already toured the northern region of Mahé visiting the different polling stations. He noted that the run-off vote is going well, highlighting an “improvement in the voting process” allowing a better flow of voters standing in the queues.

“The choice is easier this time round, it’s between James Alix Michel and Wavel Ramkalawan. I am asking everyone to come down to exercise their rights [to vote]….and choose the person they believe has worked and can do a better job for his country, Seychelles, and for the Seychellois families,” said Michel.

“I hope that the vote is peaceful….I am also calling on everyone and political parties contesting the election to respect the results when this is announced later this evening.”

The majority, around 95 percent of Seychelles’ 70,943 eligible voters are casting their ballots today, the main polling day, on the three main inhabited islands, Mahé, Praslin and La Digue.

Michel has indicated that he will be visiting polling stations in the other regions of Mahé before heading to Praslin and La Digue.

Voting in the run-off started on Wednesday at special stations on Mahé, Praslin and Silhouette as well as the outer-most islands of the Indian Ocean archipelago.