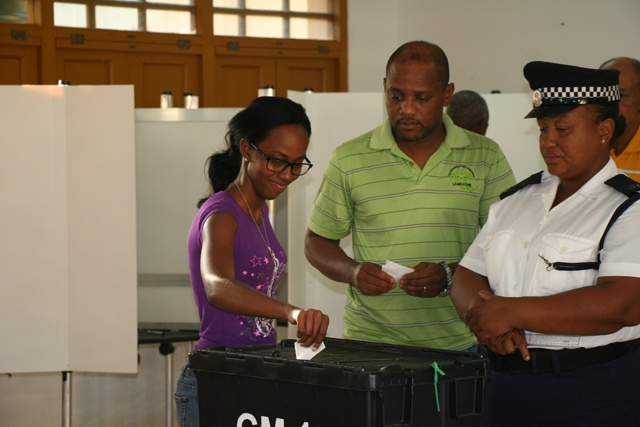 The majority of Seychellois voters are casting their ballots this Friday. (Rassin Vannier, Seychelles News Agency)

Incumbent President James Michel of the Parti Lepep and former parliamentarian Wavel Ramkalawan of the Seychelles National Party are vying for the nation’s highest office.

Voting at 25 polling stations on the islands of Mahe, Praslin and La Digue started at 7 a.m. with new measures in place to speed up the process. Electoral officers, though, asked residents not to wait until the last minute to report to a polling station.

The electoral commission said that by 11 a.m. nearly 25,000 people, or about 35 percent of registered voters, had cast ballots during the three days of second-round voting.

Seychelles, an archipelago in the western Indian Ocean, was forced into a second-round vote after none of the six candidates running for president in the early December first round won more than 50 percent.

Michel got 47.76 percent in the first round and Ramkalawan 35.33 percent. A victory for Michel in the second round would earn him a third elected term as president. He has been in power since 2004.

The second-round vote began on Wednesday on the nation’s outer islands.

Helena De Letourdis, an electoral officer at Les Mamelles voting station, told SNA that there are more staff present during the second round than there were in the first. There are also more voting tables and officers with one designated for elderly, disabled and expecting mothers.

De Letourdis said the changes made the voting quicker than the last time. Voters at some polling places had to wait up to three hours to vote, forcing stations to stay open past their expected 7 p.m. closing time.

“In the first 20 minutes, 250 voters had already cast their votes,” De Letourdis said of the second round voting on Friday.

At the opening of the station Friday morning at Les Mamelles, a district on the eastern coast of main island Mahe, around two hundred people had already queued up. The district has a total of 2,408 eligible voters.

The queue, which ran outside the gate, was twice as long as compared with the first round two weeks ago.

Patrick Lablache, a voter from Les Mamelles, said he arrived at the station at 3:55 a.m. because he had to be at work at 8 a.m.

“Last time I came I was the fourth person. Today I am the first,” Patrick told SNA.

Raymonde Pierre, a 77-year-old resident, said her voting experience went smoothly. She said she voted for a different candidate than during the first round.

“It is different now, so I did not vote for the same candidate as last time,” explained Pierre.