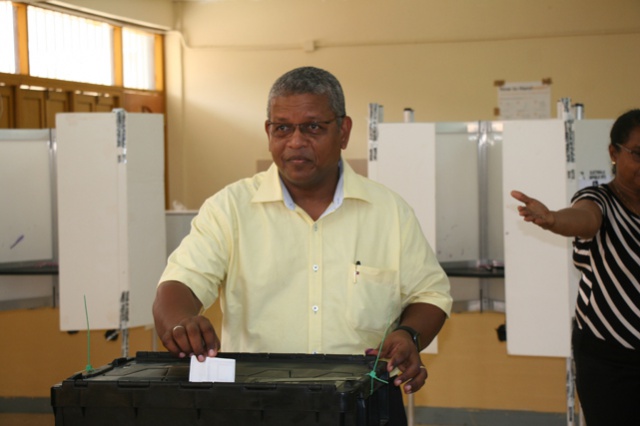 Ramkalawan is facing incumbent President James Michel of the ruling ‘Parti Lepep’ [Peoples Party], who is seeking his third and final mandate at the helm of the island nation’s government.

The two were among the six candidates who contested the first round of voting earlier this month but none received the required 50 percent to win an outright majority.

Three of the other candidates who contested the first round have indicated that they are now backing Ramkalawan.

The SNP leader was seen arriving at the Belonie Secondary school, serving as the polling station for St Louis, a central district on the main Seychelles island of Mahe at around 11.30 a.m. local time accompanied by his wife and eldest son.

Speaking to the local media, after casting his vote, Ramkalawan said campaigning for the run-off vote went well, however he had a few complaints regarding certain publications that appeared in the local press, which he felt were not appropriate.

He also expressed discontent with regards to alleged 'bribery and violence' he says has been occurring during the course of the campaigning period.

"Apart from this I can say that our campaign has gone well, we have not faced major difficulties, our people went out and did what they had to do and I think that we will achieve good results today," said Ramkalawan.

The SNP leader has also been going round the districts on Mahe since this morning and was expected to head of the second most inhabited island of Praslin this afternoon.

"When the results are announced tonight let us take it calmly...so that we can unite this nation....I would love for tonight's results to be in favour of the opposition, so that the people who are red, green, blue, yellow and white, can all celebrate democracy in Seychelles.’

The leader of the SNP Wavel Ramkalawan and incumbent President James Michel earned the most votes in the first round of voting, Michel with 47.76 percent and Ramkalawan with 35.33 percent.

The majority, around 95 percent of Seychelles’ 70,943 eligible voters are casting their ballots today, the main polling day, on the three main inhabited islands, Mahé, Praslin and La Digue.

Voting began on Wednesday at special stations on Mahe, Praslin and Silhouette and on the outer-most islands of the Indian Ocean archipelago.