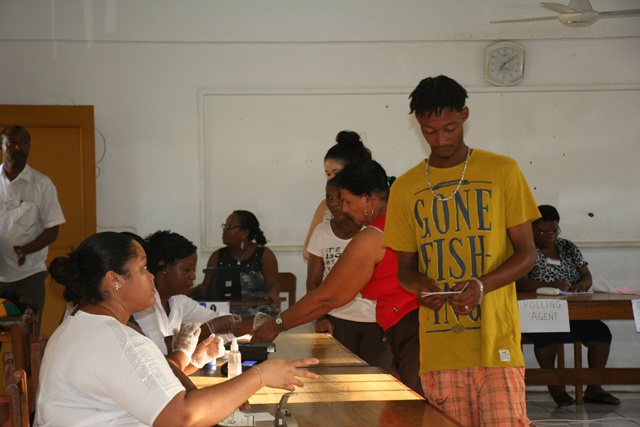 A total of 49,837 Seychellois voters have cast their ballots as at 3 p.m. on the main polling day in the run-off presidential election in the island nation. (Rassin Vannier, Seychelles News Agency)

(Seychelles News Agency) - Voters casting ballots Friday in the second round of Seychelles' presidential election are voting at a faster pace than the first round held earlier this month, an election official said.

Incumbent President James Michel of the Parti Lepep and former parliamentarian Wavel Ramkalawan of the Seychelles National Party are vying for the nation’s highest office.

The vote for president in the islands of Seychelles in the western Indian Ocean was forced to a second round taking place Wednesday through Friday.

The chief electoral officer, Charles Morin, said 50 percent of the approximately 71,000 eligible voters had cast their ballots by midday. The figure had rose to 70 percent by 3 p.m.

The voting station with the highest turnout currently is Cascade, a district on the eastern coast of main island Mahe with 82 percent. Baie Lazare in the Southern part of the island, is the second highest with around 80 percent.

The lowest figure is from the inner islands with 56 percent.

Morin credits the increase in early voting to the changes made after the first round to ensure that the process is as smooth and quick as possible.

“We are happy with the way presiding officers are managing all situations throughout this election. The measures we have taken are also helping the process,” Morin told SNA.

“I am really satisfied because compared to the last time the aggressive verbal attacks the officers went through have not happened. We saw that the two candidates are veterans and they understand the elections rules and procedures,” Morin elaborated.

The electoral commission has nevertheless confirmed of reports that some activists are campaigning while in queue. This is being dealt with by the police.

With a faster election process, the electoral commission expects stations to close by 7 pm and results announced between 11 pm to midnight.