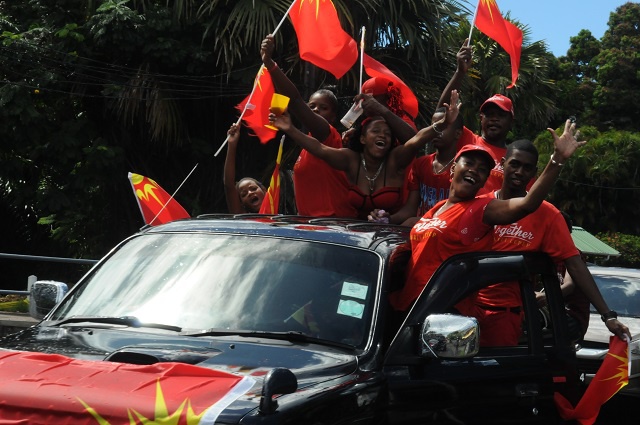 Celebrations begun soon after the much awaited results of the election were announced in the early hours of this morning, and intensified in the afternoon with a motorcade that started off in the capital, Victoria.

The president elect also joined in the motorcade.

Michel was facing Seychelles National Party Leader Wavel Ramkalawan in the second round of voting. The two came out ahead in the first round, which saw none of six contenders win an outright majority of 50 percent plus one votes.

Results announced by the Chairman of the Electoral Commission early this morning revealed a closely fought race between the two contenders, with Michel winning the vote by a narrow margin of only 193 votes.

“I am very happy we won…now we need to keep calm and accept the results. We should not forget that in spite of everything we are all Seychellois,” a 58-years-old supporter of Parti Lepep told SNA.

“It was a tight election but the party that won deserves to win because the people want stability,” said another.

Seychelles National Party supporters on the other hand have echoed their leader’s call for a recount of the votes rejecting the results announced this morning.

“I strongly feel that the results were suspiciously biased. I do hope there will be a recount,” a 23 year old SNP supporter told SNA.

“Parti Lepep knows that they have not won the election...but I am not discouraged by the results,” said another.

Ramkalawan said after the announcement of the results that the SNP had submitted a letter to Hendrick Gappy, the Chairman of the Electoral Commission (EC) to request a recount of the votes.

Gappy has confirmed receipt of the letter contesting the results.

“I think Mr Ramkalawan has made it clear that he is not accepting the results, the results are very very close…he’s asked for a recount. The Commission will meet on Monday with our lawyer to consider the various modalities of what to do next,” said Gappy in an interview aired by the Seychelles Broadcasting Corporation, SBC this afternoon.

To note that the Elections Act makes provision for all counted, rejected and unused ballot papers relating to a presidential election to be kept for a period of 3 months from the date of the elections.

“On the expiration of that period [the Chief Electoral Officer] shall destroy the ballot papers and other documents unless otherwise directed by the Constitutional Court or otherwise required for investigation or trial of an election petition or offence,” states the act.

In spite of the celebrations on the winning side and the rejection of the results by the opposition side, the police have confirmed that the atmosphere remain calm and peaceful and that “no major incident of violence” had been reported up to 4pm today.

Meanwhile it's been announced that 71-year-old Michel will be sworn in as the re-elected president of Seychelles, at State House on Sunday afternoon, to serve his third and last mandate at the helm of the island nation’s government.

The swearing-in ceremony will be broadcast live on the national radio and television.

Sunday will also see international observer missions present their preliminary statement on the second round of voting to the media.