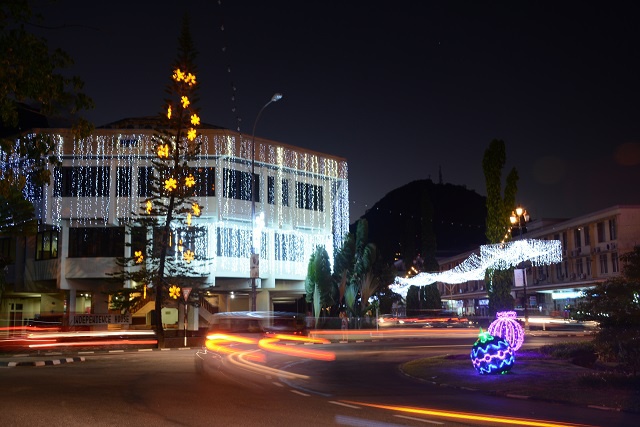 (Seychelles News Agency) - A trip to Victoria after sundown during the Christmas season is fast becoming a tradition for many Seychellois families.

It is during this special time of the year when Victoria, the country’s capital on the main island Mahe, lights up in competition with the twinkle of the night sky. This year is of no exception as the mayor’s office has created another magical Victoria. Palm trees hugged by golden and clear blue lights are not the Hollywood embodiment of a snowy northern-hemisphere Christmas. But Victoria still has a unique way of pulling it off.

Colourful lights adorn huge decorative gifts and majestic Christmas trees, and they drape off buildings and trees. The light show can be seen on Francis Rachel, Independence Avenue, and 5th June Avenue from 6:45 p.m. until 6 a.m.

In an interview with SNA, the mayor of Victoria, Jacqueline Moustache-Belle, said the city brings back some decorative favourites every year but tries to also offer new festive features.

This year, Moustache-Belle said that alongside the presence of motifs on buildings, the electricity poles come alive with lights.

She said Revolution Avenue, which is the location of the Central Police Station, has also joined in the Christmas magic, much to the excitement of the police officers.

“Those who were on duty came out when we were putting up the decorations … behaving like kids with new presents,” said Moustache-Belle.

Another special feature, she added, are the angels along Olivier Maradan Street where the Roman Catholic cathedral is located.

“We will have angels by the church for the midnight Mass,” said Moustache-Belle.
The job of dressing up the capital is done with the help of local businesses, which assist in decorating or give donations to the mayor’s office.  This time, the mayor’s office even received a donation from Ghuangzou Municipal in China.

Most families, who would have already paid a night visit to town around this time last year, told SNA they have not made the evening trips as per tradition.

“Last year I came with the children,” said resident Noeline Labiche. “It was lovely…This year I haven’t brought them yet but I will.”

Gilbert, who only gave his first name, usually visits downtown to admire the decorations with his family.

“The Christmas mood has been taken over by the election,” he said, referring to the presidential election that wrapped up with the Saturday announcement that President James Michel had won the second-round vote.

Moustache-Belle is not discouraged with the less-than-usual number of families for the customary evening walks in town. She believes that with the election now over, Seychellois families will be flooding the town to make new Christmas memories.

General » Be a reporter: Write and send your article » Subscribe for news alert
Tags: Jacqueline Moustache-Belle, Mayor of Victoria