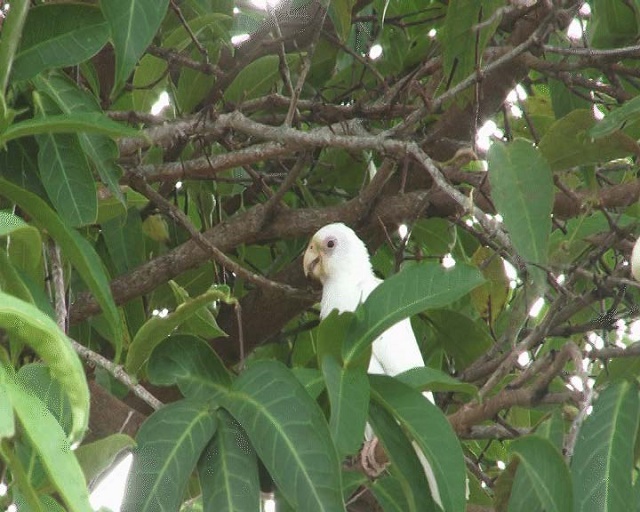 Perched high up on a fruit tree, the 'white' Black Parrot has caught the attention of residents on the Seychelles second most populated island of Praslin. (Seychelles News Agency)

Though named the black parrot, this unique bird -- proudly recognized as the national bird of Seychelles -- is usually of a dark brownish-grey colour.

The Seychelles Island Foundation (SIF) in November launched the search for the white specimen as the black parrot entered its breeding seasons.

"This is the first time since the black parrot project started that the staff of the Vallee de Mai has encountered one with that colour. We want to know genetically if this is a mutation, look at the blood samples to see the relationship or if there is any other scientific reasons for the white colour," Marc Jean-Baptiste, site manager for the Vallee de Mai nature reserve, a UNESCO World Heritage Site, said in an interview Monday.

The white bird was the target of a catch and release effort by SIF in July on Praslin, the second-most populated island in Seychelles, a nation of 115 islands in the western Indian Ocean.

The black parrot (coracopsis barklyi for the scientifically inclined) has an estimated population of between 500 and 900 birds. The current northwest monsoon period is the time when they breed in a 38-squar-kilometer area of Praslin.

The staff at SIF are tasked with finding potential or active nest sites.

We "return to these sites on a regular basis and check them for eggs. Once any eggs have been laid the team record the number of eggs, when they hatch into chicks and when they fledge from the nest,” explains Terence Payet, a ranger at the Vallee de Mai.

He added: “All fledglings are ringed before fleeing the nest. Any eggs or chicks that do not survive are also recorded.”

Several of the monitored areas are designated as national parks and others are state or private lands. This is why every year SIF encourages the active participation of the estimated 6,000 residents of Praslin.

The programme also allows the foundation to collect data on the reproductive behaviour of the black parrot, which is listed as "vulnerable" on the Red List of the International Union for Conservation of Nature (IUCN).

In spite of running this programme for seven years, the endemic bird still faces several challenges such as competition for food from other invasive species such as mynah birds and loss of habitat due to development.

"This is a crucial time for the parrots and key to their survival," said Payet.