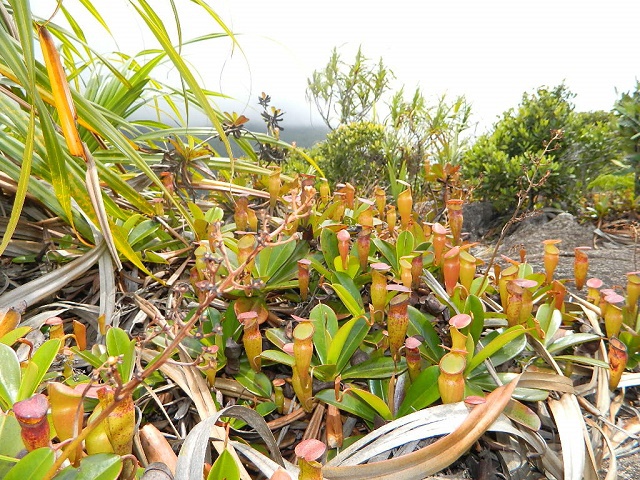 Seychelles pitcher plant population could be as low as ‘a few hundred individuals’, according to ETH Zurich student, Hirzi Luqman. ( Seychelles News Agency)

(Seychelles News Agency) - Two Seychelles islands have up to 1,000 pitcher plants, a mischievous and conniving tube-shaped plant that traps small insects and animals, a conservation study has found.

There’s good news for bugs, snakes and frogs --which the pitcher plant can eat! -- but bad news from a conservation perspective, an expert said.

A report published in the newsletter of the Plant Conservation Action group (PCA) raises potential concerns over the status of this unique species.

There are likely a few hundred and possibly up to 1,000 pitcher plants growing in Seychelles, said Hirzi Luqman, a student at ETH Zurich, a university in Switzerland. A recent survey counted the plants on Mahe and Silhouette islands.

“But even taking the upper limit estimate of one thousand as the population size, this is still very low, and a cause for conservation concern,” said Luqman.

Using its well adapted pitcher-shaped organs, the pitcher plant or “lalyannpotao” as it is known in the Creole language, feeds on insects and small animals that are captured and eventually digested. The Nepenthes pervillei is the scientific name of the only pitcher plant found in the Seychelles

Large clusters of the carnivorous plants can be found on several mountain peaks the on main island Mahé and the third most populated island Silhouette.

Luqman says that these clusters can be deceptive. Individual pitcher plant can often cover large areas and produce dozen of pitchers each, which may give the illusion of being many plants.

Coming from the Plant Ecological Genetics group of the ETH Zurich, Luqman was accompanied on the plant-counting survey by his colleague Christoph Kueffer. Their report was published in August.

Whilst conducting the study on Mahé and Silhouette, Luqman hiked up several of the islands’ breath-taking mountains which can reach as high as 905 meters in the case of Morne Seychellois, Seychelles’ highest peak.

One piece of good news is that there appears to be considerable genetic variation within and between the different populations of pitcher plants observed in the study, which Luqman said is beneficial as it acts as a form of insurance against potential diseases and environmental change.

This genetic variation, according to Luqman, is maintained and possibly accentuated by the varied distribution of the plants. They are separated and isolated from each other by the sea and the lowland areas that lie between the glacis summits on which the plants predominantly grow on.

In spite of being revered through various mementos such as bank notes and stamps of the archipelago, Luqman noted a lack of official censuses towards the conservation of this species in Seychelles.

On the global scale, the species is already threatened by ongoing destruction and reduction of its habitat.