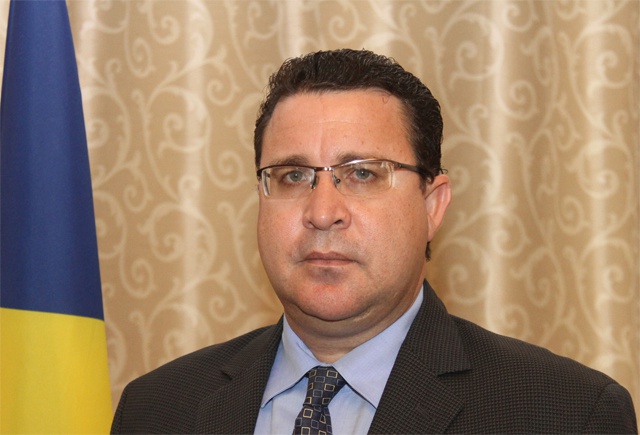 (Seychelles News Agency) - The Seychelles Minister of Finance, Trade and Investment, Pierre Laporte, has been honoured with two awards at international events. Minister Laporte was announced the Southern African Finance Minister of 2013 by the African Leadership Magazine at the US-Africa Investment Forum awards ceremony held in Houston, Texas on May 05.

Laporte was appointed Finance Minister in March 2012 after four years as the Central Bank Governor and has been a key figure in implementing the country’s successful economic reform process since the International Monetary Fund programme commenced in 2008.

According to a statement issued by the Ministry of Finance, Trade and Investment, the forum paid homage to individuals and organizations that have positively affected the lives of people and communities in Africa, and his award recognized his stewardship over the economic reforms in Seychelles and the role he played in reviving the country’s growth and stability.

Minister Laporte was also honoured by the Georgia Legislative Black Caucus with a Special Commendation award by the Honourable Dee Dawkins-Haigler, Chair of the Caucus. The Special Commendation is presented by the largest legislative caucus in the State of Georgia House of Representatives for “outstanding contribution and service to humanity”

The commendation recognized the minister’s role in the IMF-supported reform programme and also recognized his performance as the IMF’s resident representative in Niger before he was appointed at the Governor of the Central Bank in 2008.

While dedicating both awards to his family, and particularly his parents, Laporte has also attributed them to the government and people of Seychelles and expressed special thanks to Seychelles’ Vice President Danny Faure, his predecessor in the Finance Ministry, for the roadmap he put in place for the economic reforms.

“Without the courage of our Government, led by President Michel, and the patience and resilience of the entire people there would have been no successful reforms,” he said in the statement.

Minister Laporte added that the awards were a further example of recognition by the international community of the good example Seychelles has set as a state that has successfully transformed its economy after an IMF intervention.

Finance » Be a reporter: Write and send your article » Subscribe for news alert
Tags: Minister of Finance, Trade and Investment, awards, Pierre Laporte