A glimpse into the world of the Seychelles Turtle Lady 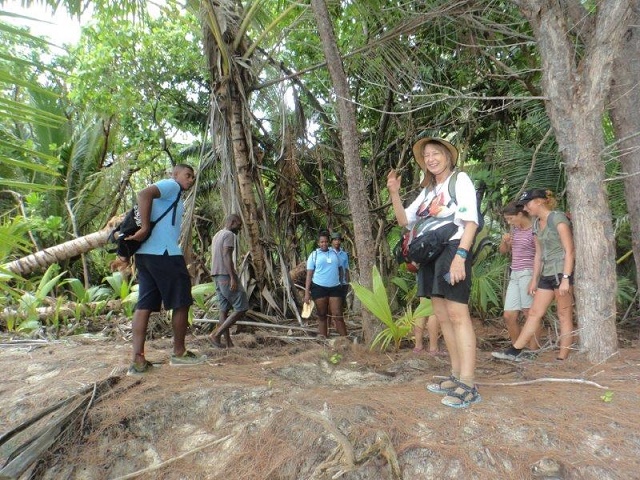 Jeanne Mortimer, who is nicknamed ‘Madanm Torti” or the Turtle Lady is recognized as an authority on sea turtles in Seychelles. ( Seychelles News Agency)

(Seychelles News Agency) - When it comes to sea turtle conservation in Seychelles, one of the first names that come to mind is Jeanne Mortimer, who is often referred to as ‘Madanm Torti” or the Turtle Lady.

Coming to the island nation in the western Indian Ocean as a young scientist in January 1980, Mortimer came to help with the depleting population of sea turtles. The American-Seychellois biologist is a recognized authority on turtles and a member of the IUCN/SSC Marine Turtle Specialist Group since 1979.

Mortimer has made the islands her second home. And it’s a good place to be for a turtle lover as Seychelles has the fourth-highest nesting population of turtles in the world.

Could this be as a result of the recommendations and tireless work of Jeanne Mortimer? A meeting with her in a café in the centre of the Seychelles’ capital Victoria was a journey into the world of sea turtles.

SNA: It is quite unique to find someone who specializes in sea turtles. Why are you so interested?

JM: Ever since I was a kid I liked insects and reptiles. When I started working with turtles back in the 1970s it just felt really good! And it is not a narrow subject as one would think! What I really like about turtles is that they frequent different habitat both marine and terrestrial. Plus, they are economically important to people so you also have to be kind of an anthropologist.

SNA: Why did you first come to Seychelles?

JM: I was used to travelling, so that never scared me when I heard there was a job in Seychelles, I thought that was an interesting place to be. I arrived here in January 1980 with the aim of looking at the turtle population and making recommendations for future management.

SNA: How hard was it for someone like you who was passionate about turtles to work in such an environment where turtles were not protected?

JM: Back then it was a culture to eat turtle meat. It was something that was accepted by everyone and something that was practised by everyone throughout the archipelago. It was hard in the sense that everyone assumed that it was fine to kill turtles. My position was not to come and tell them what to do but to figure out what was going on. So I did not make any recommendations until I had been here for three years because I wanted to understand the situation.

SNA: What changed for the turtles frequenting Seychelles?

JM: Throughout the 80s poaching and killing continued but Seychelles took a strong stance towards protecting turtles through regulation and education but mostly by designated protected areas throughout the archipelago. Islands such as Aride and Cousin had strict rules on protecting habitat and monitoring of turtles. Other islands such as Curieuse restricted tourism in critical areas to allow turtles to nests undisturbed throughout the year.

SNA: But there were still challenges?

JM: The greatest challenge in Seychelles back then and even today is habitat protection so that they remain suitable for turtle nesting and cater for the influx of tourism developments. We cannot ban all the beaches for the sake of turtles either but people need to be educated. One of the big problems is that hawksbills are daytime nesters and they also want to come on the beach at the same time as we enjoy a nice picnic. Whereas the green turtles, you could put up a hotel behind a green turtle beach and if you control lighting, it works.

SNA: What role did you play during this time of transition for the islanders and the country?

JM: In the early days, people believed that turtles will never disappear. There were too many! But I have been to places back then where turtles disappeared and I knew it could happen in Seychelles too. My global perspectives helped to enlighten the population and the policy makers. In the early 80s, scientists tagged small turtles and through that they were shocked to find how slowly they grew. It changed their way of thinking completely.

SNA: How can a small country like Seychelles make a difference in turtle protection if others are not doing the same?

JM: Seychelles hosts an important nesting population for hawksbills and green turtles, which makes it important regionally and globally in saving these two species. Turtles are their most vulnerable during nesting and that is why historically when we [Seychelles] were killing big fat females which are easier to catch, the whole global population was dwindling too. Once they leave Seychelles to forage, they are less vulnerable because they are in the open ocean. We know that turtles tagged in Seychelles are being killed in regions such as East Africa but even though they are being killed the numbers are still going up.

SNA: How do you see the future of sea turtles in Seychelles?

JM: I am very optimistic because we have a lot of protected areas and at those sites the numbers have been going up. It has been a slow process. On Cousin for example since the 1970 they started a programme of protection on the island and now it has gone by eight or nine times in size. The Atoll of Aldabra has increased quite nicely... So the future of turtles, it’s going to be very good as long as we continue to maintain our stance on protecting them.

SNA: You are now Seychelles own ‘Turtle Lady’. What’s next for you?

JM: After a few years, I got attached to the country. I think it is funny how Seychellois have come up with a nickname for me back in the early 80s since I was the expert. So the name Madanm Torti – the Turtle Lady (laughs) is stuck now. Since 2008, I started a not-for-profit organisation called Turtle Action Group of Seychelles (TAGS) with the intention of bringing all those involved in turtle conservation in Seychelles together. We want to have a website to show some of Seychelles successes and how it came about. It will also create more awareness about the 20 or so different programmes of management of turtles. I would also like to produce a book about turtles in Seychelles.