From the edge of disaster- Seychelles tanker prevents oil spill 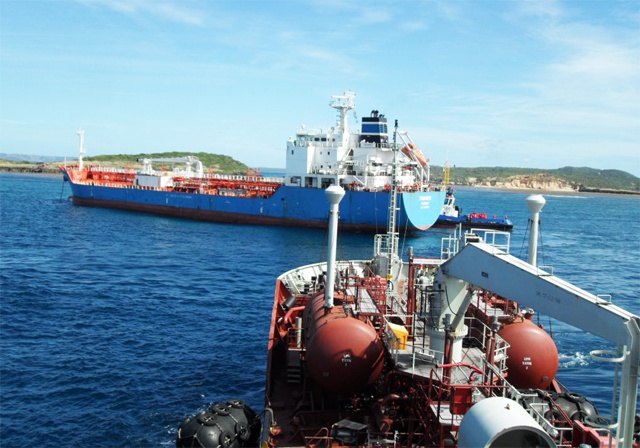 (Seychelles News Agency) - With an oil spill disaster averted off the coast of Madagascar, the crew of the smallest of Seychelles’ fleet of tankers Seychelles Paradise are back in Seychelles, to tell the story of the first operation the Seychelles Petroleum Company (SEYPEC) has undertaken to salvage diesel from a tanker that ran aground.

The green tanker undertook the delicate operation to salvage 2,655 tons of diesel from a Norwegian tanker- the MT Tromso which ran aground on the reefs just off the coast of Diego Suarez in Madagascar mid- April.

Captained by seasoned navigator Wilton Ernesta, the crew of 11 young Seychellois and 2 Sri-Lankans took ownership of the situation. They removed the diesel from the MT. Tromso and transported it to Diego Suarez, a port in the northern tip of Madagascar, within two days.

“Before we started, the salvage company and ourselves met and we had to agree on a thorough step by step plan of what we were going to do and how we were going to it. Due to the delicacy and precise nature of this operation I had to ensure that my whole crew was giving their utmost, so from the start I gathered them all together and let them be in on the planning so that everyone realized what was at stake there,” Captain Ernesta told SNA; adding that he is very proud of the work his crew has done.

We carried it out in two stages. We started the first one at sun down around 7 p.m (Monday April 28) and finished at 3 a.m. The second stage was much more demanding as we had a very tight schedule. We had to be alongside and have the pipes fitted by 2 a.m. and by 10 a.m. we needed to have completed the work. We were able to deliver on this time precision and all the while we kept the salvage company informed of everything were doing," Ernesta explained.

The perfect execution of the operation earned Seychelles Paradise the compliments and praise of the salvage company as well as the Proprietors of MT Tromso.

SEYPEC’s Shipping and Crewing Manager Pierre Prosper said the tanker had to adjust its schedule to carry out the salvage.

“It was meant to be providing fuel to some Taiwanese fishing vessels, but this was postponed and through its success, Seychelles Paradise has not only earned in revenue but also in establishing a solid reputation of providing high quality precision service,” said Prosper.

Although this is the first time a Seychelles tanker has participated in such an exercise Prosper says all the crew members are trained in all aspects of tanker operations including emergencies and salvage.

Speedy and small, the right tanker for the job

The MT Tromso tanker’s owner company- World Tankers- contracted an agent out of Dubai in the UAE to charter the services of a salvage company as well as one to remove the diesel from the MT Tromso. Three tankers submitted their bids.

This meant the Seychelles Paradise could get close to the stricken tanker without the danger of it also running aground.

Seychelles Paradise has performed several operations outside Seychelles, “including the supply of fuel to an oil rig, within port limits of Mauritius in December 2013. The vessel also assisted Comoros with a fuel cargo in 2013, at a time when their supplies were short.”