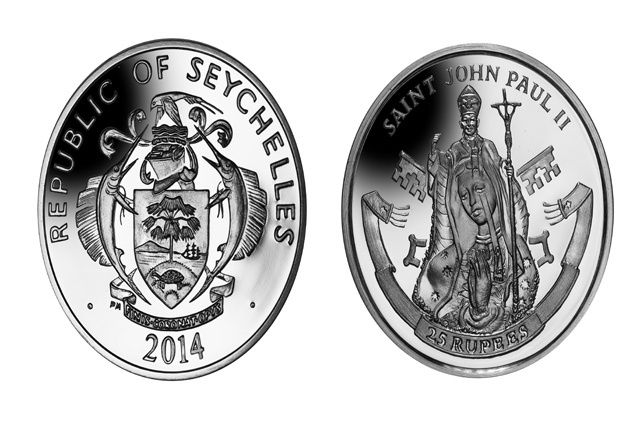 (Seychelles News Agency) - The Central Bank of Seychelles has released a new commemorative coin in remembrance of the canonization of Catholic pope of the 20th Century, John Paul II.

The canonisation of John Paul II took place on Sunday April 27 in a ceremony during which John XXIII was also canonized.

According to an article published on the Pobjoy.com website the new coin which shows a statue of Saint John Paul II with an image of the Virgin of Guadalupe are made entirely from keys donated by Mexicans.

The Seychelles coat of arms is featured on the back of the coin.

“The coins will not be sold locally. The Central Bank of Seychelles has given a UK based company “Pobjoy Mint” the full rights to sell the commemorative piece,” the head of Banking services at CBS, Mike Tirant has told SNA.

“Such souvenirs are in high demand overseas, …….however people in Seychelles who wish to buy the coin may do so through the internet,” he added.

“If ever there is a high demand locally for the coins we will try to see if we need to have it sold locally, but for now they are being sold overseas.”

The commemorative coins are available in Cupro Nickel at $21 and Proof Sterling Silver at $98.

It is to be noted that Pope John Paul II visited the Indian Ocean archipelago in 1986.

Seychelles has a population of around 90,000 and according to the National Bureau of Statistics 76.2 percent of the Seychelles population is Roman Catholic, 6.1 percent Anglican, 2.4 percent Hindu, 1.6 percent Muslim, and 13.7 percent other faiths.