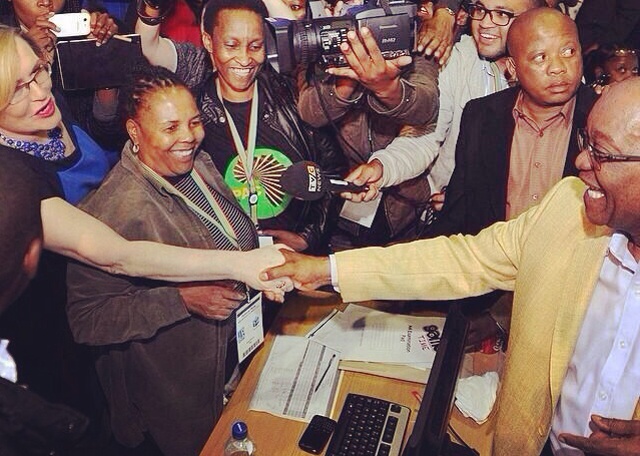 (Seychelles News Agency) - There is little doubt now – the African National Congress has won its fifth democratic election, and the champagne is no doubt already on ice for the celebrations that are soon to follow. With 96 percent of ballot papers already counted, the incumbent Jacob Zuma is preparing for his second term in office as the president of South Africa.

More than 70 percent of South Africa’s 25.39 million registered voters went to cast their ballots Wednesday May 07, and the official results could be announced as early as Friday evening.

Last night, the Seychellois head of state, President James Michel congratulated President Zuma on his re-election, and no doubt other heads of state will be following suit today. The moment that stood out last night was a handshake between Zuma and the Democratic Alliance leader Helen Zille, as party leaders visited the Independent Electoral Commission (IEC)’s national results centre.

A handshake is often a commonplace greeting, a salutation among friends. But it becomes poignant when political leaders often at odds with each other and having fought a long battle for power against one another, shake hands. It is then that a handshake can herald peace and reconciliation, and can mean that although South Africans remain divided, they can still acknowledge each other’s right to have differences of opinions, cultures and beliefs.

However, ex-ANC Youth League leader Julius Malema, now the leader of the Economic Freedom Fighters, although having performed unexpectedly well in the elections, gaining third place nationally with over 6 percent of the vote, refused to shake his former leader’s hand.

Malema, who was famously expelled from the ANC when he was Youth Leader, has cried foul of the slow release of election results in Gauteng Province, citing several incidents where ballot boxes stuffed with DA or EFF-marked ballot papers were found dumped or hidden in houses.

Reacting to reported irregularities last night at the IEC’s media briefing, Pansy Tlakula, the chairperson of the Independent Electoral Commission (IEC) said that all incidents were being investigated, but reiterated that on the whole the process went smoothly.

South Africans have much to be unhappy about, with poor service delivery, corruption, lack of sanitation and housing, as well as inequalities in education and high unemployment levels the reason for most discontent. Despite this, the majority of South Africans clearly have a deep loyalty to the ANC and the belief that the existing government still has a lot of potential.

Questions now surround what plans President Zuma and his cabinet have for South Africa, with plans afoot for Jacob Zuma to appoint three new Constitutional Court judges in the place of three retiring judges who were appointed by ousted former President Thabo Mbeki within the next year. The new appointments are tipped to increase his sway over the judicial body that has long been at odds with many of the policies of the Zuma administration.

However, the new legislature may prove to make life more difficult for the ANC, with the ruling party slightly weakened and facing a stronger official opposition.

The EFF, which is expected to win no less than six seats in Parliament, will also no doubt be a thorn in the ANC’s side at every opportunity. The EFF has called for nationalisation of all mines as well as resources in the sea, and its anti-capitalist stance will no doubt keep both the DA and the ANC on the edge of their seats.

A cabinet reshuffle is widely expected when the next administration is sworn in for Zuma’s second and final term in office. ANC party elections are also due to take place within the next two years and divisions within the party are likely to rise ahead of the vote for the number one spot on the party ticket for the 2019 general elections.

Far away from wheelings and dealings in Parliament and in the Union Buildings among the elite politicians, a relative sense of calm and fatalism prevails over cold, dusty streets in the grip of winter.

From shacks made out of corrugated iron in informal settlements, where children queue to use outdoor toilets in the dark, to the upper-class gated communities living in luxury tinged with fear, they all came together on one day to put their hopes in the form of a cross on a piece of paper, only to wake up the next morning to find that undoubtedly, all things are likely to remain the same.