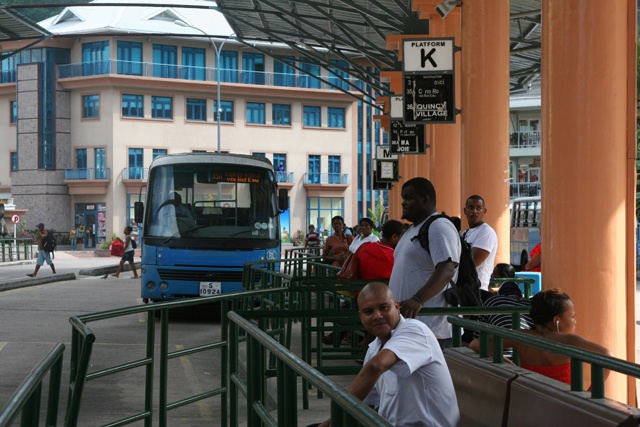 (Seychelles News Agency) - As of Sunday May 18, commuters accessing buses at the Victoria Bus Terminal will find it easier to identify the platforms to use for the different routes.

The Chief Executive of the Seychelles Public Transport Corporation Jeffy Zialor told SNA that the corporation is introducing colour coding to allow Seychellois as well as visitors to the islands to identify the platforms to take for the different routes.

‘We have just finished renovations on the roofing of the terminal. Since while this was underway we had to change the platforms for the different routes, it caused some inconvenience to our commuters. Now that we have resumed normal operations we have decided to make it even easier for the public to know which platform they should take through the use of colour codes.”

Zialor explained that the codes will be reflected on the new boards indicating the routes on each platform. Each area will have a specific colour code, for example all routes going north via Anse Etoile northern district on the main island of Mahe, may have yellow sign boards.

To back up the colour codes SPTC will also introduce electronic information screens at the terminal which will advise about changes in bus schedules and other platforms.

In yet another development, SPTC has also relooked the operations at the terminal to optimize use of all available space and reduce any congestion.  This will mainly have to do with which way buses enter and leave the terminal.

“For example all north bound buses using the St. Louis route will leave and enter the terminal using the entrance opposite the Unity House instead of having to go around Orion Mall. This will also ease pressure on the traffic in the area.”

Still in its bid to ensure a better experience for its commuters SPTC will soon be revamping its ticketing system and enhancing the use of payment by card. Zialor has said they will replace the existing ticketing machines on the buses, with more modern ones using new technology.

“We are also bringing in new types of stored value cards. These cards will be personalized and have the photo of the owner on them. This will make it difficult for another person to use the card even if for example it is lost.”

The personalized feature will also apply to the cards for the disabled and SPTC intends to introduce cards for the senior citizens as well. The new stored value cards will also offer higher storage, meaning that commuters will be able to put more money on their cards, thus making their credits last longer.

‘Our aim is to continually improve the level of service we offer our esteemed commuters. They are our priority and we will go the distance to ensure they travel safely and in comfort on our buses,” Zialor stated.

SPTC, established in 1977, is the sole company that provides public transportation across the main island of Mahe.