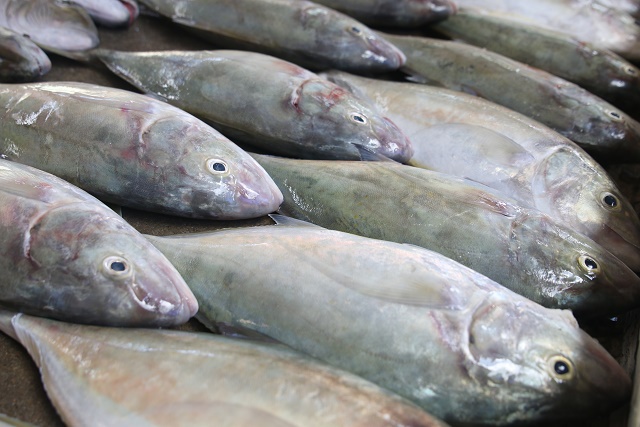 An abundance of Travellies ( Karang) on sale at the local market. ( Joe Laurence, Seychelles News Agency)

(Seychelles News Agency) - It’s like the fish are begging to be caught.

Fishermen say that schools of fish are filling the waters of Bel Ombre bay on the northwestern side of the main Seychelles’ island of Mahe.

The phenomenon, which began over the New Year, is bringing in large groups of trevallies Carangidae (karang in Creole) to the shores. Fishermen can stay close to the shoreline and still bring in a good haul.

The well-worn cliché “It’s as easy as shooting fish in a barrel” comes to mind.

PeterTirant, the chairman of the Fisherman's Association at Bel Ombre, told SNA in an interview Wednesday that a similar phenomenon happened about 10 years ago.

"Shoals of trevallies swam after their prey close up to the beach and anyone could just catch them with their hands,” saidTirant. "This time around fish did not just swim up to the shore, we actually had to fish for them in the bay’s water.”

Trevallies are semi- pelagic fish, meaning they spend some of their time in the open sea and some closer to shore. They are non- stop swimmers and chase after their food to all depths. It’s one of the most popular fish for grilling among the archipelago’s population of 93,000.

Calvin Gerry, senior oceanographer at Seychelles Fishing Authority, told SNA on Wednesday that such behaviour by the trevallies is a normal phenomenon, but that it usually occurs in less abundance and therefore does not cause a stir.

Gerry said there have been similar reports of large crowds of fish around La Digue, the island nation’s fourth-largest island.

Despite what would be considered an easy catch for fishermen, Tirant told SNA that fishermen prefer to go farther out to sea to fish.

"At such events people tend to say all kind of strange things, even that this is a sign that something bad is going to happen," said Tirant.