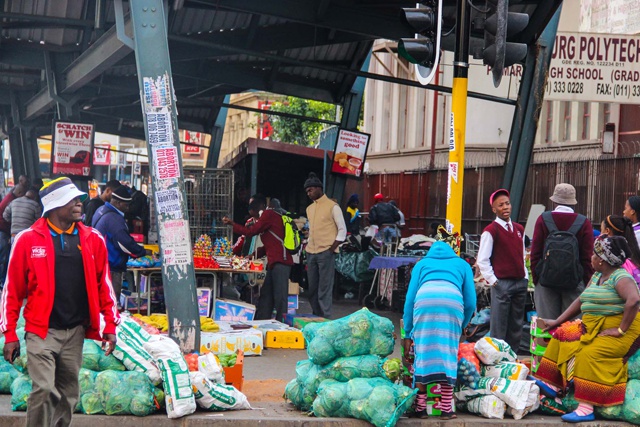 Selling activities at Plain street on Saturday 10 May 2014 in Johannesburg CBD. (Nonhlelo Nsingo)

In an interview with SNA, the Chief Executive of Durban Chamber of Commerce and Industry (DCCI), Andrew Layman, said incidents which would compromise the credibility of the election were “few and far between” and that is good news for the country to lure investors.

“Changes in government have too often resulted in periods of hiatus while personnel have been changed and new policies adopted. This has happened even despite the fact that it has been the one ruling party in power,” said Layman.

NDP is a plan designed by the South African government to eliminate poverty and reduce inequality by 2030. According to the plan, Pretoria can realize these goals by drawing growing an inclusive economy, building capabilities, enhancing the capacity of the state, and promoting leadership and partnerships throughout society.

“Business generally favoured the NDP and would urge the government to continue to support its implementation as a priority, notwithstanding the opposition from labour,” Layman said.

On Wednesday, South Africa went to the polls to elect a new national assembly and provincial legislatures.  By Friday afternoon the African National Congress (ANC) was leading the national elections with more than 11 million votes.

According to preliminary results, the party had 11 181 338 votes by 15:00 assuming 62.24 percent representation of the national vote after 98.83 percent of counting had been completed.

The chamber said election results reflects “political stability” in South Africa with a potential attract investors to drive the country’s economic growth. However, Layman said the advent of The Economic Freedom Fighters (EFF) as the country’s second official opposition political party raises alarm to the businesses.

“The emergence of the EFF as a force is viewed with some alarm by businesses because its manifesto does not favour free market principles and the pre-eminence of the private sector as the engine of economic growth,” he noted.

The policies of EFF, led by former ANC Youth League President Julius Malema eight months ago, calls for the expropriation of land without compensation for equal redistribution and nationalization of mines, banks, and other strategic sectors of the economy, without compensation.

Speaking with SAN in Johannesburg a local political researcher Johan van der Merwe said it is unlikely that the EFF will have significant impact on the structure of South African politics, but it will certainly impact the tone.

“With Julius Malema in parliament, we can expect to see some fireworks and he may succeed influencing policy debates,” Van der Merwe said.

The EFF has so-far reach one million votes in the 2014 elections and promised to make extreme noise in the parliament.

According to pre-election report compiled by the local research group Pondering Panda, EFF had its strongest support among young people especially those aged 18 to 24 years.