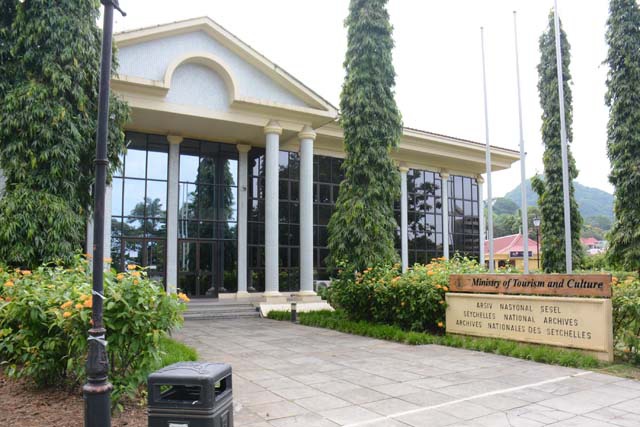 The Seychelles ministry of tourism and culture took measures to rid the building of the fungus. (Joana Bonnelame Seychelles News Agency)

The Seychelles ministry of tourism and culture took measures to rid the building of the fungus.  After closing the building, the ministry consulted a private local company — ‘Envirotech’ — to work on the affected areas.

“They installed ozone and UV light systems to help control the bacteria in the area. The department also invested in humidity regulator apparatus. We also did a general cleaning and it was going very well,” said Alain Lucas, director of the national archives.

With concern for staff health, the archives bureau decided to limit staff exposure to the UV lights and restricted the ozone treatment to nights. Lucas tells SNA that the bacteria re-appeared last year and again affected the staff, some of whom developed chronic skin problems, forcing some to take sick leave.

They spoke during a meeting with the press Wednesday. The expert team — made up of a biologist, chemist and conservationist — did not see a problem of contamination of the archive documents that usually leads to the health problems.

“We have seen some areas affected by fungus but this is due to the bad maintenance of the air conditioning system.

The collection is free from fungus apart from a box with documents that had been in contact with water,” says Marie-Dominique Parchas, the conservationist. The team will be taking back to France photographs, samples of the bacteria and more.

They found no mold but only the normal aging of documents. “The quality of the paper is an important factor for that. We have documents from 1772 that are in good condition and those from 1918 that have been affected from acidity from the ink that causes the paper to become brittle,” said Lucas.

One bit of good news for the archives was the opening of the Providence record centre which helped with the space issue and limited further propagation of the bacteria.

“This project was conceived since 2002, when we recognized that we did not have sufficient space at the national cultural centre in Victoria to store government files that are transferred to us from various government departments,” said Lucas.

“Those documents remain the property of the departments till they reach 30 years since their transfer to us. So at the Providence record centre the government officials have more space to consult their documents whenever needed,” he continued.

Archives conservationist Parchas told SNA that it is only after the thorough analysis when they reach France that they will be able to recommend solutions and identity the bacteria found at the archives bureau.

Nevertheless she gave us her personal opinion on how best Seychelles with its tropical climate can deal with the problem. “I believe the best solution is to use the natural method by allowing windows to be opened regularly.

The Seychelles climate is another factor that may be beneficial. Fewer variations in seasons may be favorable for the documents,” says Parchas.