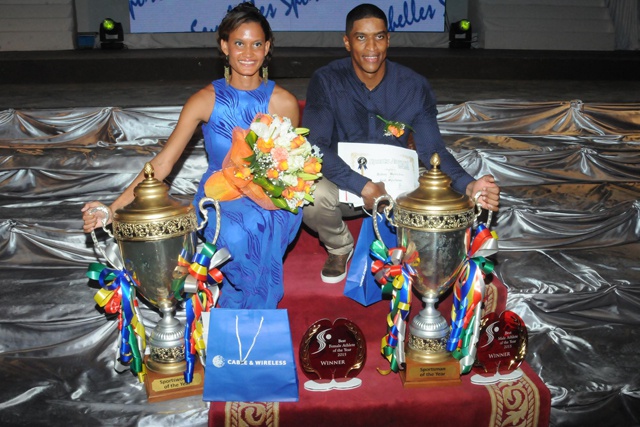 The male and female athlete of the year for 2015. (Louis Toussaint Seychelles News Agency)

(Seychelles News Agency) - Rodney Govinden and Lissa Labiche are the Seychelles' best sportsman and sportswoman of 2015.

Govinden, the top performing sailor last year and Labiche, the top female high-jumper, were triumphant on Friday evening at Sports Awards Ceremony the National Sports Complex Hall at Roche Caiman, a district on the eastern coast of main island Mahe.

The annual event recognises athletes who have excelled in their sports discipline in Seychelles, an archipelago in the western Indian ocean.

For the two athletes, Govinden and Labiche, winning the the award is a culmination of their outstanding performances last year.

Winning the title for the first time, Govinden was one of the first two Seychellois athletes to qualify for the 2016 Olympic Games in Rio de Janeiro, Brazil, August 5–21. He finished second out of ten in the laser standard category in the African Sailing championship in Algeria in December.

The Olympic qualifier also excelled in the Indian Ocean Island Games in Reunion in August last year, where he won a gold and silver medal in team racing and laser standard respectively.

Govinden said that he was shocked to have won the award but happy that his efforts during the past year has been recognized because he deserves it.

"It is a dream come true and I know my results are deserving for the title…I am going to train even harder now to get good results in the Olympics, this is what I will be focusing on," says Govinden.

Labiche on the other hand wins the title for the second time following her high level performances on the international scene in 2015. She was crowned sports lady of the year in 2012.

The Seychelles female high jumper is holding the high jump national record of 1.92 metres set in the South African open championship last May.

Labiche won 9 gold medals in several competitions in 2015 and needs to clear 2 centimetres more on her present height to reach 1.94 metres to qualify for the Olympic Games.

Labiche said that she had high expectations to win because of her good performance last year and that she deserved to win the title.

"I will be working hard and I will qualify because that is my dream for this year."

The sportsman and sportswoman of the year for 2014, was boxer Andrique Allisop and weightlifter Clementina Agricole.