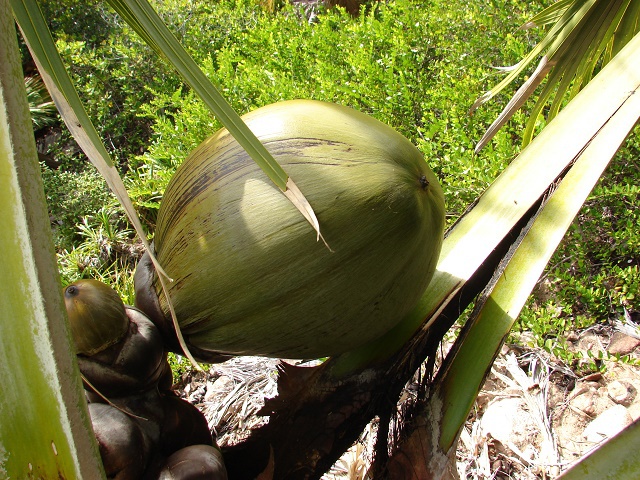 (Seychelles News Agency) - Poaching continues to be a hindrance to the growth and re-population of the rare nut called the coco-de-mer that is a jewel of the island nation of Seychelles, a park authority official said.

A two-year survey was carried out on Curieuse Island and confirmed that poaching is harming the population of the coco-de-mer, the largest seed in the plant kingdom.The Coco-de-mer is already listed as threatened by the International Union for Conservation of Nature, (IUCN).

The survey which was conducted from 2014 revealed that out of over 6,500 trees only 272 nuts were found on the island, Seychelles National Park Authority official Allen Cedras told SNA.

Cedras said that poaching coco-de-mer is a lucrative business. A mature nut is a prized possession for tourists coming to Seychelles, selling for between $450 and $750 each. The immature nuts are also considered as a rare delicacy among certain islanders while in some Asian cultures it is rumoured to be a powerful aphrodisiac.

“The nuts grow too slowly that we cannot do the survey every year. Moreover nuts are not as abundant as it used to be due to incidences of poaching. The only nuts we counted were on trees found in valleys or higher up in the mountains,” said Cedras.

After Praslin Island, which hosts the pristine forest of Vallee de Mai, a World Heritage Site, Curieuse Island, a national park since 1979, has the second-most important forest of these endemic nuts. A few trees can also be found on several other islands of Seychelles but their numbers are not significant.

In the past forest fires were also another threat to the giant palms on the island previously known as ‘Ile Rouge,’ or ‘Red Island,’ due to its exposed mountain peaks.

“Since establishing the two stations in Baie Laraie and Anse Jose, poaching has not been as frequent. We have also regular monitoring around the island but still this seems not to be enough to curtail these incidences,” said Cedras.

The aim of the survey was also to collect as much information as possible about the coco-de-mer growing on Curieuse, one of the 115 islands of the Seychelles archipelago in the western Indian ocean.

This was a follow-up to a census conducted previously by Global Vision International (GVI), an international voluntary programme based at Anse Jose on the island.

"The five-year census commenced in 2009 with the aim of harmonising data collection between the three wild populations of Coco de Mer trees on Curieuse with the aim of showing distinct differences to the populations on Praslin,” GVI representative Chris Mason-Parker told SNA.

According to the Seychelles National Park Authority, nuts collected on Curieuse have been distinct from the other islands and records of the most shapely and heaviest nuts were collected from the island.

“There is definitely a need for a more profound scientific research on the nuts of Curieuse but in the meantime we need to find means and ways to prevent them from being exploited,” adds Cedras.