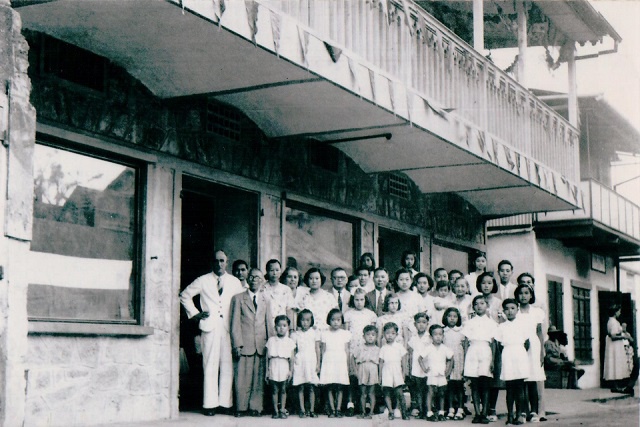 The Kim Koon family and friends at the opening of the shop in the heart of Victoria in 1956. The building still looks the same today. ( Seychelles News Agency)

(Seychelles News Agency) - In the early 1920s a boy of 13 travelled by boat from the Guangdong province, China, to the Seychelles archipelago in search of a better life. Now nearly a century years later, five generations of the Kim Koon family will soon celebrate another Chinese New Year here.

Pikkim Kim Koon, 80, known in Seychelles as Mrs. Tai Tai, is one of the oldest family members. She is the daughter-in-law of Joseph Kim Koon, the founder of the Kim Koon family business.

Pikkim told SNA in an interview that her Cantonese father-in-law came to Seychelles in search of a better future in a time when life was difficult in China. Joseph Kimkoon passed away at the age of 94 in 2002.

“His father came before him. He was 13 when he arrived in Seychelles. Joseph’s father had attempted to settle in Mauritius at first but did not like the place, so he came to Seychelles and Joseph followed soon after,” Pikkim told SNA.

Daniel Kim Koon, the 15th son of Joseph, told SNA that it is a custom for the Chinese community to join together and celebrate the Chinese New Year, which occurs on Monday. They also pray for blessing for the New Year as a family.

“On the eve of the New Year celebrations, the family will join together for a traditional Chinese dinner from the Hakka region where the family originates. On the day itself the community will all join to have dinner at a hotel,” said Daniel.

The Kim Koon family is one of the oldest Chinese families in the western Indian Ocean archipelago of 93,000 inhabitants.

The Seychelles’ nation is made up of immigrants and settlers from the African, Asian and European continents. The Chinese community in Seychelles is mostly made of merchants.

The Kim Koon family established themselves in Seychelles as general merchants, then moved into bakery and soap production. Today, they are mostly known by residents as motor vehicle sellers and for their electronic shops. The family has owned an old colonial style shop in the heart of Victoria since 1956.

After World War II, Joseph -- hoping that life would be better in China -- thought of selling all he owned to return his family of 19 children to his country of birth, Pikkim said.

“He sent the children first. They went to school in China but then there was the Communist regime in 1949 and he didn't like the Communist system. He then made his children come back to Seychelles one by one,” said Pikkim.

“The Chinese children born here now marry Seychellois. My children have visited China a few times so they know where they come from. Some Chinese families has never brought their children to China,” said Pikkim.

In the Chinese calendar the New Year will be the year of the monkey. Pikkim says children born this year will be very smart since monkeys are clever animals.