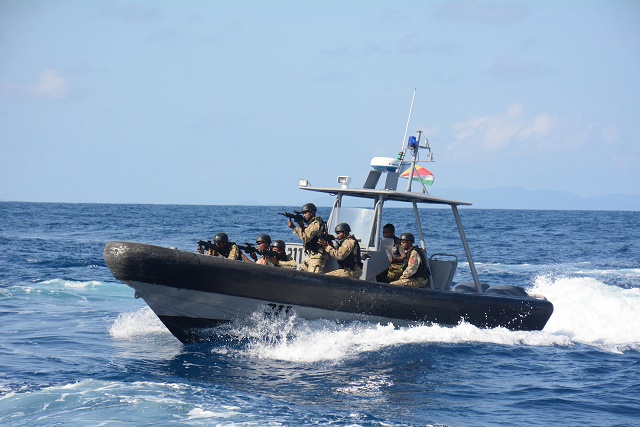 The lessons learnt from the regional military exercise led by the US Navy and hosted by Seychelles will bring success in the future, says a U.S. official.

Speaking at the closing ceremony of the military exercise, named the Cutlass Express 2016, US Navy Commander Tom Reck said the militaries practiced how to carry out search and seizures, searches for illicit activities as well as leverage tactics and procedures.”

“Lessons learned at these events will bring forth greater success in the future,” he said.

Around 100 Seychellois participated in the exercise. The main coordinator from Seychelles Coast Guard was Lieutenant Hans Radegonde.

The exercise took place January 30 to February 6 with the participation of forces from the Comoros, Kenya, Mauritius, Madagascar, and Uganda. The Eastern Africa Standby Force and European Union Naval Force also took part.

Radegonde told SNA that "Cutlass Express 2016 was a great success and being the main coordinator for Seychelles Coast Guard I would definitely say that I have developed my management and communication skills, especially since we were working in a multinational environment."

The importance of maritime operations centers and communicating or sharing critical information to increase maritime domain awareness were emphasized during the exercise, said Reck.

"All the objectives that were placed forward were achieved and everything went as planned. However there were some hiccups,” said Major Jean Attala of the Seychelles People Defense Forces to SNA on Monday.

Atala added that the lessons learnt could be added to the next edition of Cutlass Express so that participants can improve on them. This will make sure that all forces taking part will be on the same wavelength.

“I am glad to note that the various scenarios have unfolded as planned and that participants have gained tremendous knowledge by participating in this year’s edition,” said Brigadier Leopold Payet, Seychelles chief of defense forces, during the closing ceremony on Saturday.

He commended the US, Africa Command and European partners for such an initiative and their involvement as they have brought together regional forces to exercise.

“In doing so, [they have] prepared us for the future,” said Payet.

Seychelles will undergo further military training during a two-week long Indo-Seychelles bilateral exercise called ‘Lamitye’ (Creole for Friendship) 2016. The exercise will run from February 15 to February 28.