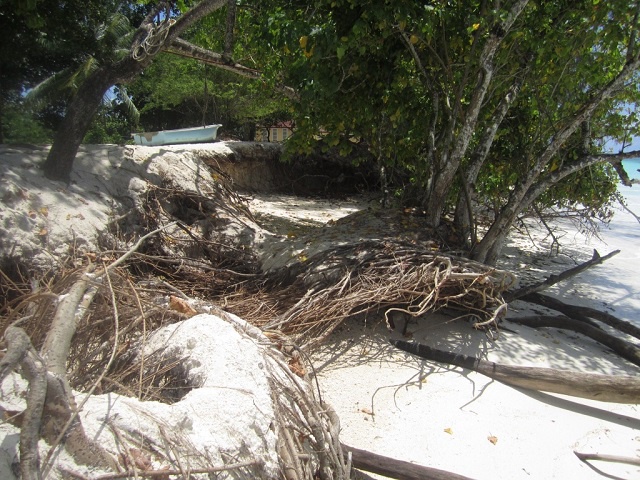 Standing at almost 2 meters high, the coast of Anse Kerlan has been experiencing erosion for years. (Coastal adaptation and management section, Ministry of Environment, Energy and Climate Change)

(Seychelles News Agency) - The successful implementation of a project in Seychelles under the Global Climate Change Alliance has resulted in a second round of funding -- $3.3 million -- from the European Union (EU), a government official said Tuesday.

The Seychelles’ principal secretary for climate change and energy, Wills Agricole, told SNA that the implementation of the first project, which ended in 2013, was a success and the EU agreed to fund a second one.

“We were successful in implementing the first project in which we met all indicators and that is why the EU did not hesitate when we appealed for a second one,” said Agricole.

The Global Climate Change Alliance was set up by the EU in 2007 to strengthen dialogue and cooperation with developing countries. Seychelles’ first project stretched from 2008 to 2013.

In the first project, Seychelles, an archipelago in the western Indian Ocean, was able to mainstream climate change actions into a national development strategy, create a strong institutional framework for renewable energy and encourage the participation of private sector.

The second project is geared towards strengthening the Seychelles’ climate change policy framework and supporting adaptation to climate in coastal areas for the next four years.

The financing agreement was signed last week by the EU ambassador to Seychelles, Marjaana Sall, and the Seychelles’ minister for environment, Didier Dogley.