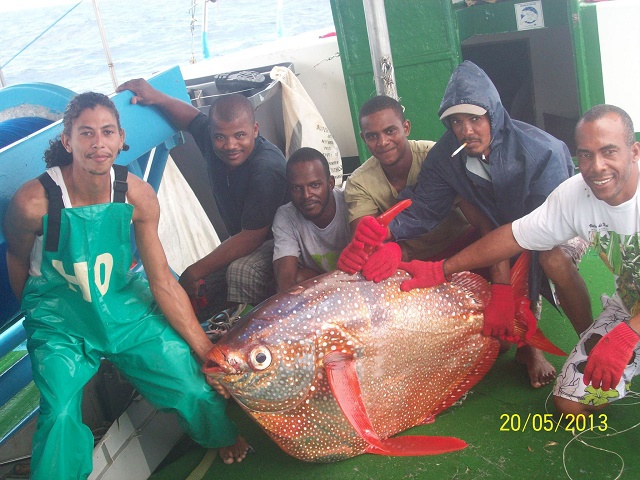 A group of Seychellois fishermen with their catch of a moonfish two years ago. The moonfish or opah, is the first fish living in deep cold waters that can keep its entire body warm, like mammals and birds. (Justin Joubert)

(Seychelles News Agency) - A fisherman’s portfolio is never complete without the tale of a rare catch, worthy of folkloric stories told on the high seas.

One fisherman in the Seychelles, Justin Joubert, took great pride in adding the moonfish to his portfolio and his name to the list of fishermen catching it not once but twice.

Science Magazine wrote in May 2015 that a study found that moonfish, or opah, is the first fish living in deep cold waters that can keep its entire body warm, like mammals and birds.

The research team in the study found that no matter what depth the moonfish dove to, depths between 50 and 160 metres, its body temperature stayed 5 degrees Celsius warmer than the surrounding water.

“It’s a remarkable adaptation for a fish,” Diego Bernal, a fish physiologist at the University of Massachusetts, Dartmouth, said in the magazine piece.

The moonfish, which is puffy and round, is one of the most colourful fish residing at the lower depths of the sea.

“It is normally caught as a by-catch," or caught without being targeted, said Joubert adding that there is no known fishing method to target the species.

The Seychellois fisherman and his crew consider themselves lucky to have caught the rare fish twice - the second time was about two weeks ago. In 2013, Joubert and his crew caught one of the shiny orange fish with white scales, north of Mahe, Seychelles' most populated island.

“It happened almost at the same exact spot over two years ago,” said Joubert, “I suppose they are somewhat more concentrated in the north.”

A local fish expert, Jude Bijoux, told SNA that it is not a species that fishermen will catch often as their population size is not that large. Bijoux advises local fishermen to report to authorities when they do catch rare species so that relevant details can be recorded.

In a case like the moonfish, Joubert says fishermen are reluctant to give their catch away, for the simple fact that the warm-blooded fish is considered one of the most valuable around.

“It is very costly on the Japanese market, where it is branded the million-dollar fish,” Joubert told SNA.

“The Japanese have a recipe for it called the ‘chicken meat of the sea’, due to its flesh being overly tender and white as the chicken flesh. Even its bones are edible as they are soft when cooked”, said Joubert.

The local fisherman does not blame others for wanting to keep it for themselves. “It is not every day that we get to feast on a fish with a reputation of costing a million dollars,” jokes Joubert.

The photo of Joubert and his crew with their impressive catch was posted on his Facebook page, sparking a lot of attention in Seychelles, a group of 115 islands in the western Indian Ocean.