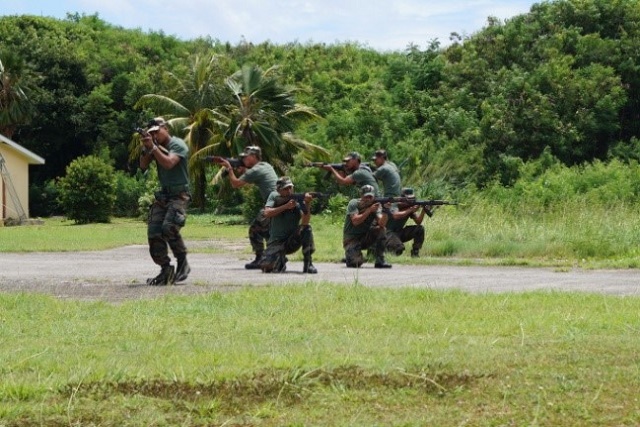 The training is focusing on existing terrorist threats from the air, land and sea, Major Jean Attala told SNA this week.

“There will be ongoing theoretical and practical exercises. At the end both parties will, together, be facing a hostage rescue scenario whereby they will have to use all means possible – the air force, coast guards and ground defense forces to free the hostages,” said Attala.

The two week training session is part of a bilateral collaboration between India and Seychelles. It includes 45 Indian and 57 Seychellois military personnel.

India and Seychelles have been conducting the joint exercise programme called ‘Lamitye’ (the Creole word for friendship) every two years since 2001 in the island nation in the western Indian Ocean.

‘Lamitye’ is part of an agreement aimed at strengthening the two forces’ ability in carrying out counterinsurgency, counter terrorism and anti-piracy operations.

Lieutenant Colonel GG Gudur, adviser to the Seychelles People’s Defense Forces and senior Indian military officer, told SNA that “the evolving nature of threat in the maritime domain and amphibious character of national security in the Indian Ocean provides an opportunity to both the forces to train and operate together if an eventuality takes place.”

Gudur said both countries benefit from this joint exercise.

“For the Indian Army forces, it would be a different country, a different terrain and a unique situation is painted for which they have to jointly arrive at a tactical solution with their Seychellois counterparts,” said Gudur.

For Seychelles, “it’s an opportunity to validate and update their tactical and operational skills from their Indian counterparts because a majority, I guess about 80 percent of the SPDF, has trained on some course at an Indian Army institution. That’s a very good experience combo for the SPDF to share and learn from,” Gudur added.

The military adviser said India is looking into the possibility of conducting future trainings at home, as it has different terrain like deserts, snow and dense jungles. The Seychelles forces would stand a lot to gain in terms of their exposure to such challenging terrain and climate, he said.

The training which ends February 28 is taking place at the Seychelles defense academy and the final exercise in the areas of Port Launay and Cap Ternay, two sub districts in the west of main island, Mahe.