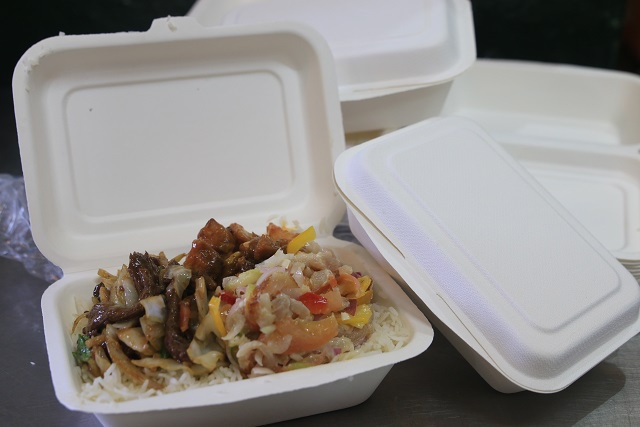 (Seychelles News Agency) - Owners of a Seychellois takeaway are the first to start using biodegradable boxes, spoons and forks.

Jules Takeaway, jointly owned by Eli and Erica Julienne, is the first business from the island nation no longer using the common styrofoam lunch boxes.

“Since we opened in January I have been using those biodegradable boxes along with its spoon and forks. We are the first takeaway in Seychelles to use such boxes. We did so because we realised that it will be of benefit to the environment,” Eli told SNA.

Jules Takeaway is situated at Cascade on the east coast of the main island of Mahe and is a popular stop for lunch or dinner boxes.

Eli says the lunch boxes provided by a Chinese supplier in big and small sizes are made from sugar cane pulp and take about three months to disintegrate. The takeaway has also introduced biodegradable spoons and forks made from corn starch.

“The spoon and fork will take about 120 days to decompose if it is on the surface of the earth and below ground that would require some more time,” explains Eli.

The government of Seychelles, a group of 115 islands in the western Indian Ocean, announced in 2015 that it would facilitate the process for any individual wishing to import biodegradable products. This coincided with the announcement of the phasing out of plastic bags.

The Principal Secretary of the Seychelles’ Ministry of Environment, Alain de Comarmond, explained in an interview with SNA what businesses have to do.

“What they need to do is send the details of the item along with a sample to the ministry of environment. If we have sufficient proof that it is biodegradable, we do the necessary work so that they can be exempted of Value Added Tax (VAT) when importing the product.”

Other local businesses have shown interest in importing biodegradable products.

De Comarmond says they will be using the product on a larger scale, with other takeaway owners and the public in general.

Eli tells SNA he has received positive comments but some people are more concerned with having their meals warm.

“A lot of people are not used to the boxes yet. They find it difficult to use. It has a one hour guard for keeping a meal warm but after that if the meal has sauce, the box will start absorbing the liquid. The commonly used styrofoam boxes will keep a meal warm for hours,” explains Eli.

Christopher Savy, 30, is a first time customer of Jules Takeaway and welcomes the initiative.

“I think it’s good, because I can’t continue polluting the environment. If all takeaways could do this, I think it would be good,” says Savy.

Eli Julienne, co-owner of Jules' Takeaway, has many years of experience as a chef. He started his career at Coral Strand Hotel, moved to La Reserve on Praslin, the second most populated island and then former Plantation Club Hotel.

Eli's experience in the kitchen has also brought him to several corners of the world as he worked on a luxury cruise ship for almost 10 years starting in 1989.

“I returned to Seychelles in 1998, with the idea of opening a takeaway. I have spent fourteen years in my own catering business,” says Eli.