Chinese visitor numbers on the rise, sign market is expanding 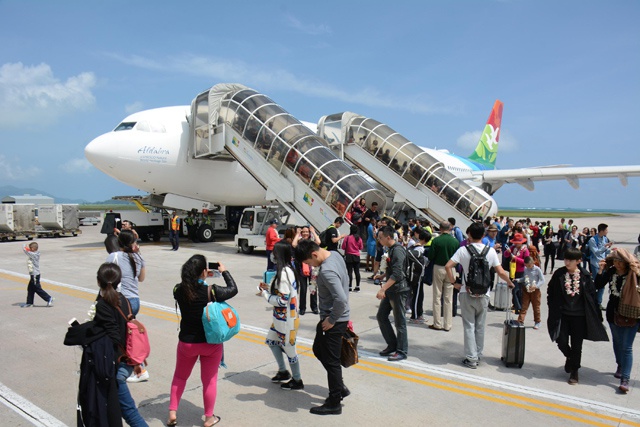 File Photo: Chinese visitors disembarking from an Air Seychelles flight to spend their spring holidays in the island nation earlier this month.

According to the National Bureau of Statistics 4,196 visitors from the Asian nation visited the 115-island archipelago in the western Indian Ocean up to February 21 this year. That's an increase of 17 percent compared to the same period in 2015.

The guest relations officer at the Raffles Hotel on the second most populated island of Praslin, Chinese national Yi Zhi, told SNA that half of the hotel’s occupancy last week were visitors from China.

“They love the beach as these visitors usually comes from big cities like Beijing, Shanghai. A few are also very interested in nature but most of all they want to see the beaches,” said Yi, adding that one thing Chinese visitors find difficult to adapt with is the Seychelles cuisine.

“From now until May, there will not be many of them, but from May there is another holiday in China so the figures might go up again,” said Yi.

China is considered one of the fastest-growing tourism markets worldwide.

Air Seychelles started a weekly direct flight to China as part of the Seychelles' strategy to tap into the Chinese tourism market. The flight was launched earlier in February coinciding with the Chinese spring festival.

The Seychelles' tourism board’s chief executive Sherin Naiken describes the emerging market as one with a lot of potential.

“We are working hard to maximise the number of visitors in the second half of the year when there will be other important holidays for the Chinese visitors,” Naiken told SNA.

By then she said there would be more awareness on the availability of the direct flight between the two destinations.

According to Naiken, the Seychelles Tourism Board is increasing awareness of the island destination in China to advertise the fact that the national airline is now flying to Beijing.

While China is currently in the second top spot for visitor numbers to Seychelles this year, the tourism board is not envisioning that the Asian market will overtake the traditional European markets any time soon.

“China will remain in the top five markets but we must realize that Europe is our established market where there have been a lot of investment and the awareness is also there,” said Naiken.

France remains the leading tourism market for Seychelles with 6,010 visitors so far this year.