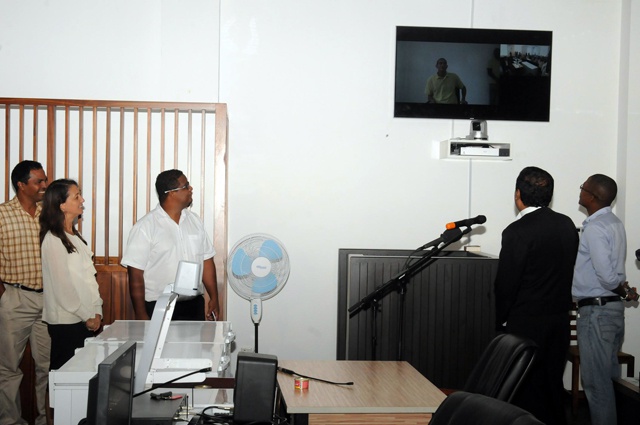 Seychellois law states that a person awaiting trial has to be remanded every 14 days, said Mathilda Twomey, the Chief Justice of the Supreme Court of Seychelles. She also added that having video link hearings respects the accused fair trial rights.

“Lots of prisoners do not want to make the trip [to Ile Du Port], firstly because the vehicle is crowded. They prefer to remain at Montagne Posee and the court orders their remand,” explained Twomey.

Seychelles’ judicial system had the ability to record audio, and with the installation of this system, video recording is now possible.

The video link has been made possible through the collaboration of Space95, a local technology company, the Department of Information Communications Technology (DICT) and Cable and Wireless.

The video evidence system donated to the western Indian Ocean archipelago by the United Nation Office on Drugs and Crime (UNODC) connects the prison to six courtrooms. Representing the UNODC at launch was Shanaka Jayasekara, the programme officer for the Indian Ocean region.

The donated system costs roughly $150,000. It will enable faster and smoother processing of information.

“[It] allows the court to maximize the use of court time, reducing the inevitable delays by transporting prisoners back and forth between facilities. It is possible that the same link can be used for other witnesses who cannot travel to come to court,” said Twomey.

There are ongoing discussions to expand this system, which has the capacity to interact with mobile phones operating on IOS and Android with the use of a free app.

"This is important as there are some experts who are on the move and regardless where they are in the world they can interact with the system using their mobile phones as long as they have a network,” Andy Noelle, the chief operating officer at Space95 told SNA.