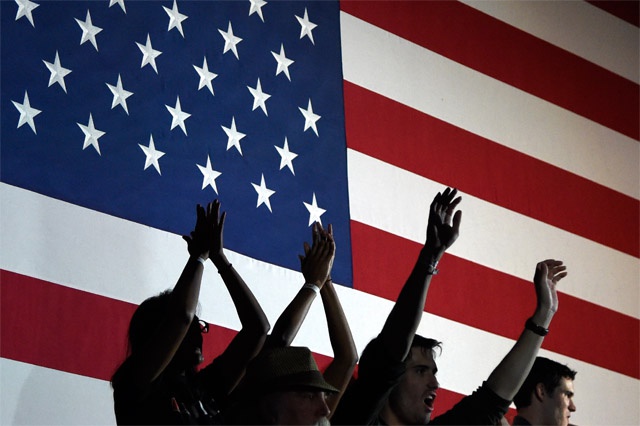 Supporters of Democratic presidential candidate Hillary Clinton cheer as the results of the polls are announced during a campaign event on Super Tuesday in Miami on March 1, 2016.  (RHONA WISE / AFP)

(AFP) - Donald Trump and Hillary Clinton each took a giant step toward securing the White House nominations of their parties Tuesday, thumping rivals in a slew of "Super Tuesday" primaries.

Bellicose billionaire Trump weathered a barrage of attacks from fellow Republicans to win at least five of 11 states, according to projections, coming within striking distance of becoming the Republican nominee to replace President Barack Obama.

Clinton bested rival Bernie Sanders handily across a host of southern US states -- Alabama, Arkansas, Georgia, Tennessee and Texas -- winning big among African-American voters in a vindication of her strategy of embracing Obama.

She also reversed her 2008 primary loss in Virginia, bolstering her general election credentials.

Super Tuesday is the most pivotal day of the US presidential primary season so far, with half the Republican delegates and a third of Democratic delegates needed to win the nominations up for grabs.

Trump's victories were widespread, from Alabama and Georgia in the deep south, to Massachusetts in the northeast, to the vital battleground state of Virginia.

The scope and scale of the victories will sow terror among establishment Republicans, who fear the party of Abraham Lincoln, Theodore Roosevelt and Ronald Reagan could face electoral annihilation against Democrats in November.

Trump immediately trained his sights on Clinton, the immensely experienced former first lady, senator and secretary of state, who emerged from her own battles as the prohibitive Democratic favorite.

"I'm a unifier," insisted Trump. "Once we get this finished, I'm going to go after one person."

On the Democratic side, the 68-year-old Clinton had played down talk of a clean sweep before voting began, and Sanders did notch a few wins -- in his tiny home state of Vermont and in Oklahoma.

"America never stopped being great!" she said to cheers from supporters in Miami.

"It's clear tonight that the stakes in this election have never been higher, and the rhetoric we're hearing on the other side has never been lower."

A new CNN/ORC poll found that both Clinton and Sanders would easily defeat Trump if the general election -- set for November 8 -- were held now.

But few are likely to underestimate the 69-year-old Trump after his primary rout.

His incendiary rhetoric has infuriated his Republican rivals, and the race has descended in recent days into a mud-slinging match between him and the mainstream favorite Marco Rubio.

The Florida senator sent a letter to his supporters Tuesday calling Trump "a serious threat to the future of our party, and our country."

"In just the last few days, Trump has refused to condemn white supremacism and the Ku Klux Klan, praised dictators Saddam Hussein and Moammar Qaddafi, and proposed infringing upon the First Amendment of our Constitution," he wrote.

But it might be too little too late, with polls showing Trump with a commanding lead nationwide.

The CNN/ORC poll gave Trump 49 percent of support nationwide, with Rubio a distant second at 16 percent and Ted Cruz one point further behind.

Rubio was not projected to win in any of the 11 states that voted Tuesday, fundamentally undermining his claim to be the representative of mainstream Republicanism.

But he ended the day in Florida, a clear signal that he wants to win his own home state, which votes on March 15.

For good measure, his campaign also announced events in Kentucky, Kansas, and Louisiana, in an attempt to pre-empt questions about his future.

Cruz was kept alive with projected victories in his adoptive home state of Texas, with a bumper haul of delegates, and neighboring Oklahoma.

Rubio and Cruz will harbor long-shot hopes that Trump fails to win enough delegate support to secure the nomination outright, leaving the convention to decide the nominee in July.

They may also be betting that whoever emerges strongest from a brutal 2016 campaign would be the prohibitive favorite in four or eight years' time.

Trump's inflammatory rhetoric -- he has accused Mexico of sending "rapists" across the border, mocked women and the disabled, urged a ban on Muslims entering the country, and eagerly advocated the use of torture -- would have been the undoing of a normal candidate.

But the 2016 cycle has been anything but normal, with a furious electorate keen to back an outsider who scorns the political establishment.

As the prospect of a Trump nomination loomed ever larger, a lengthy clip by British satirist John Oliver skewering his many false claims and inconsistencies has gone viral.

The segment, first aired late Sunday on "Last Week Tonight," launched a hashtag, #MakeDonaldDrumpfAgain, in a nod to the candidate's original family name.

By Tuesday, the word "Drumpf" was ahead of both Rubio and Cruz in Google search rankings -- right behind Trump himself.