After 60 years as a household pet, Seychelles' three-legged giant tortoise retires to sanctuary 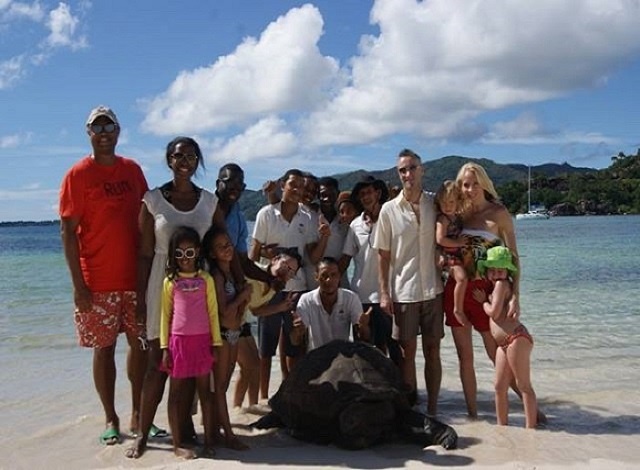 Captain K in a last souvenir photo on the beach of Praslin before moving on to his new home. (Marcus Pouponneau)

(Seychelles News Agency) - Dinora Pouponneau and her three-legged giant tortoise Captain K have been together for nearly 60 years. But the tortoise's 80-year-old owner has decided it is time to part ways.

Captain K is effectively moving to his retirement home: Curieuse, a tortoise sanctuary near Praslin, the second most populated island of the Seychelles archipelago.

Letting go of her precious pet was not an easy decision for Pouponneau. After years of mulling over the idea, this week Pouponneau decided it was time for Captain K to retire away from the family he has known for so long.

“I loved my tortoise, and I gave him all kind of names,” says Pouponneau, adding that over the years, aside from taking care of her husband and seven children, she also took solace in the company of her pet.

Before moving to Curieuse, the Seychelles giant tortoise was first processed by the rangers and volunteers of Global Vision International, an environmental organisation based on Curieuse.

“All tortoises found on the island have a number. We also record all its characteristics and information such as height, weight, and finally, it receives an identification number,” Allen Cedras, an officer of Seychelles National Park Authority, told SNA.

With an estimated 128 giant tortoises, Curieuse has one of the largest populations in Seychelles, a group of 115 islands in the western Indian Ocean.  There, they are free to roam but are often collected and counted, while the babies are kept in cages as protection from poachers, until they are fully grown.

Cedras said since 2006, the island -- once a leper colony that was turned into a national park in 1979 -- has been a refuge for four other tortoises received from private owners.

“In the case of Captain K, we will be monitoring him for the following few months. It will take a while for him to adapt as he has lived in an enclosure most of his life and with only three legs he might not be able to move very far to find food,” said Cedras.

Pouponneau and Captain K have a long history together. Pouponneau received the tortoise as a gift two days after her mother passed away in 1959. They've been together ever since.

“Had he been able to speak he would have had so many stories to tell, both good and bad, about our family. For example, when we moved into the new house, how we raised our children and later the arrival of our grandchildren as he has seen it all," she said.

Pouponneau said that although her tortoise has been well cared for, life had not been without incidents for Captain K. Ten years ago, her pet fell into a rubbish hole and one of its legs had to be amputated due to the injury sustained that day.

Two large holes in the front of its carapace is another reminder of the day that Captain K was almost dragged away by force, by humans who also pierced his shell.

Now almost 60 years later, the three-legged pet has outgrown his pen and outlived many of the Pouponneau siblings living in Baie Ste Anne, one of the two districts on Praslin.

The reptiles, which can weigh up to more than 400 kilograms and grow to more than one metre long, can live for over 80 years.

“I have sold three previous ones for a small sum to private owners as they were much smaller. But this one I could not give away. So we kept it until now,” said a teary Pouponneau.

Once Pouponneau made her decision, the giant tortoise was transported from his pen into a waiting pickup truck, followed by a quick boat trip to Curieuse, where he is going to stay.

The giant tortoise joins hundreds of others who have made the island their home. So if you visit Curieuse Island, do watch out for turtle Number 129, and say hello to Captain K.