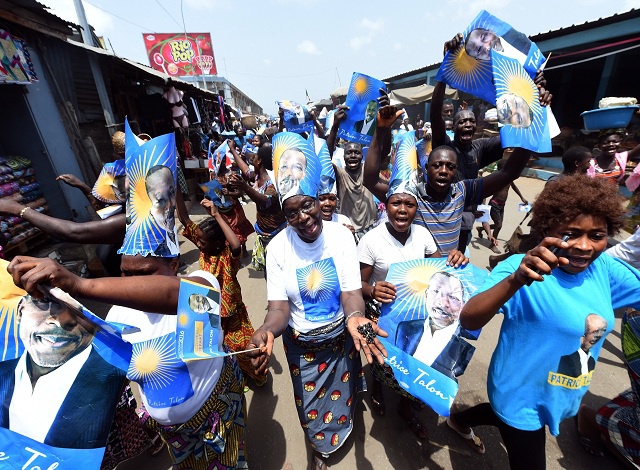 A picture taken on March 4, 2016 shows supporters dancing with posters of cotton tycoon and presidential candidate Patrice Talon during a rally in Cotonou. Benin goes to the polls on March 6, 2016 to choose a new president, with a record number of candidates standing, including two of the country's most influential businessmen. Thirty-three candidates are standing for election, including Prime Minister Lionel Zinsou, a Franco-Beninese former financier who is seen as current President Thomas Boni Yayi's preferred successor. (PIUS UTOMI EKPEI / AFP)

(AFP) - Benin goes to the polls on Sunday to choose a new president but with lingering concerns about the distribution of voters' cards that has already forced a two-week postponement to the election.

Polling stations open at 0600 GMT in the tiny West African nation of 4.7 million people and close nine hours later, with a record 33 candidates on the first round ballot paper.

Incumbent President Thomas Boni Yayi is bowing out after serving a maximum two five-year terms. The first results are expected within 72 hours of the vote.

The 61-year-old, who is standing for the ruling Cowry Forces for an Emerging Benin (FCBE) party, has been seen since his appointment as Boni Yayi's chosen successor.

He already has the support of two opposition parties and on Friday dismissed critics who see him as an outsider, "parachuted" in by former colonial power France.

"People say I'm white, an interloper, a foreigner, a Frenchman, a colonialist," Zinsou told AFP. "But there's perhaps 10 percent of people who act like that.

"For 90 percent of people, obviously I'm different but that creates a certain interest."

Zinsou, who was a speechwriter for France's socialist former prime minister Laurent Fabius in the 1980s, said he had also encountered people who were proud of his success abroad.

Two of Benin's leading businessmen, Patrice Talon, 57, and Sebastien Ajavon, are also seen as front-runners, pitching for the top job after previously bankrolling presidential bids from the sidelines.

Also among the favourites are economist Abdoulaye Bio Tchane and financier Pascal Irenee Koupaki, both 64.

But with so many candidates, political analysts predict no decisive result on Sunday and believe whoever wins in the northern region will determine the overall result.

Key issues in the election include job creation, tackling corruption, improving health and education, and the economy.

The first round of voting had been due to take place on February 28 but was rescheduled because of delays in the production and distribution of voters' cards.

On Saturday evening, distribution of new voters' cards had not started in two central states (Zou and Plateau) and had not been completed in several of the 10 others that make up the country.

The head of the independent electoral commission, Emmanuel Tiando, told reporters both old and new cards would be allowed on Sunday "to avoid any tense situations and allow all voters to take part in the ballot".

In Zou and Plateau, voting would be allowed exceptionally with identity cards, he added, promising that all election material was available in polling stations across the country.