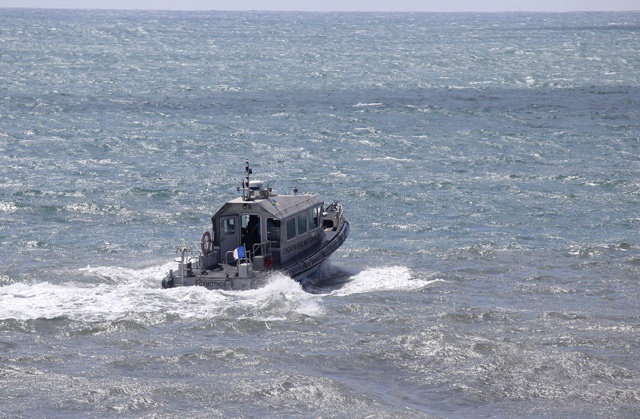 A file photo taken on August 14, 2015 shows a patrol boat of the French maritime gendarmerie taking part in the search for wreckage from the missing MH370 plane off the coast of Saint-Marie on the French island of La Reunion. (AFP PHOTO/RICHARD BOUHET)

(AFP) - A resident on the French Indian Ocean island of Reunion who last year found a wing fragment from Malaysia Airlines flight MH370 said on Sunday he had come across a second possible piece from the missing plane.

Johnny Begue, who found the "flaperon" part while cleaning a beach last July, told AFP he handed over the new suspected object to police immediately after finding it last Thursday.

He said he was out jogging by the sea shore when he found the object measuring about 40 by 20 centimetres (15 by eight inches), which had a blue mark on the surface and was grey underneath.

Begue said it was of the same lightweight "honeycomb" construction as the flaperon piece.

The flaperon he found remains the only piece of debris identified with certainty as having come from the flight.

Begue said he has been combing the island's shores ever since.

"When there's bad weather is when you should look, when the sea tosses up a lot of stuff," he said.

Police have not contacted Begue since he handed over the new object on Thursday, he said.

The Gendarmerie Brigade for Air Transport -- the police unit which investigated the first find -- could not immediately be reached by AFP for comment.

That object, which is about a metre (3.25 feet) long, has been sent to Australia for expert analysis.

An international team of investigators probing the loss of flight MH370 will issue a statement on Tuesday, the second anniversary of the plane's disappearance.

The unprecedented Australian-led hunt for wreckage from the flight is expected to finish its high-tech scanning of a designated swathe of seafloor in the remote Indian Ocean by July.

Australian, Malaysian and Chinese authorities plan to end the search -- projected to cost up to $130 million (120 million euros) -- at that point if no compelling new leads emerge.