US strike kills at least 150 Shebab fighters in Somalia 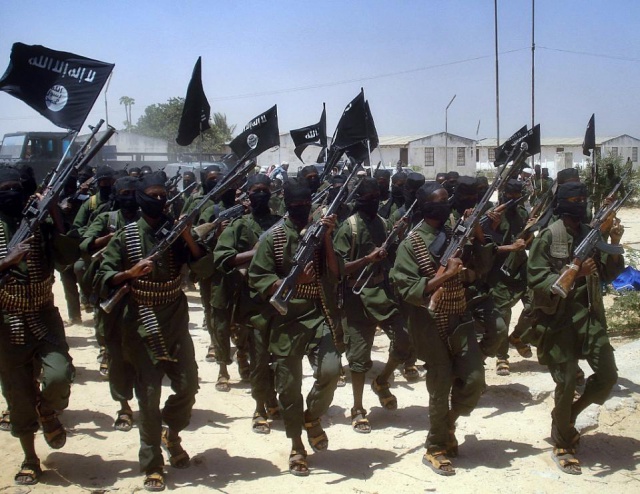 (AFP) - An American air strike on a Shebab training camp in Somalia killed more than 150 fighters planning an imminent attack on forces from the United States and its regional allies, the Pentagon said Monday.

While the US military regularly conducts operations targeting the Al-Qaeda-linked fighters in Somalia, Saturday's raid had a greater toll than all previous such US strikes combined.

The raids, which began in 2003, had killed between 113 and 136 militants prior to the latest operation, according to the New America foundation.

Captain Jeff Davis, a Pentagon spokesman, said the strike on Camp Raso killed fighters as they were completing "training for a large-scale attack."

Warplanes and unmanned drones were used in the strike, about 120 miles (195 kilometers) north of Mogadishu.

"We know they were going to be departing the camp and they posed an imminent threat to US and (African Union) forces," Davis said, noting that as many as 200 fighters had been using the camp.

The US military has a small and secretive presence in Somalia, with a defense official estimating the current number of American troops in the country on an advise-and-assist mission at 150.

After a relative calm in the Somali capital, the Shebab have ramped up attacks in recent months, taking advantage of the apathy of the African Union's AMISOM mission and the weakness of Somalia's central government.

Davis said the group had neared the completion of specialist training to conduct "offensive operations," declining to provide further details on the assault the fighters were allegedly planning.

"Their removal will degrade al-Shebab's ability to meet the group's objectives in Somalia, which includes recruiting new members, establishing bases and planning attacks on US and AMISOM forces there," he said.

The training camp had been under surveillance for some time ahead of the strike.

"There was a sense that the operational phase was about to happen," Davis said.

Pentagon press secretary Peter Cook said the strike was carried out in "self defense," but he did not provide any detail on the threat the fighters may have posed.

Shebab fighters have claimed responsibility for a string of recent attacks, including a twin bombing at a busy restaurant in the Somali city of Baidoa last month.

Also Monday, six people were wounded when a laptop bomb exploded at an airport in Somalia, police said, the second such attack in recent weeks targeting passenger aircraft.

The bomb exploded at a checkpoint in the small central town of Beledweyne, some 200 miles (325 kilometers) north of the capital Mogadishu, where last month Shebab insurgents claimed responsibility for a bomb attack which ripped a hole in a passenger plane shortly after takeoff.

No one immediately claimed responsibility for the latest blast, which took place at a checking area where security screening is carried out before cargo and bags are loaded onto planes.

On January 15, Shebab fighters overran a military outpost in El-Adde, southern Somalia, manned by up to 200 Kenyan soldiers deployed as part of the African Union peace-enforcement mission, AMISOM.

Kenya has refused to say how many of its soldiers were killed in the attack.

Shebab fighters are targeting AMISOM because in the absence of a functioning national army. The 22,000-strong force is the only protector of the internationally backed government the jihadists are committed to overthrowing.

- More transparency on US strikes? -

President Barack Obama's administration promised to publish in the coming weeks a casualty count from the air raids it has conducted since he took office in 2009.

The toll is due to list both combatants and civilians the US believes were killed.

Critics have condemned the lack of transparency on these raids, often taking place in unstable countries inhospitable to US forces like Pakistan, Somalia and Yemen, where the United States is not officially at war.