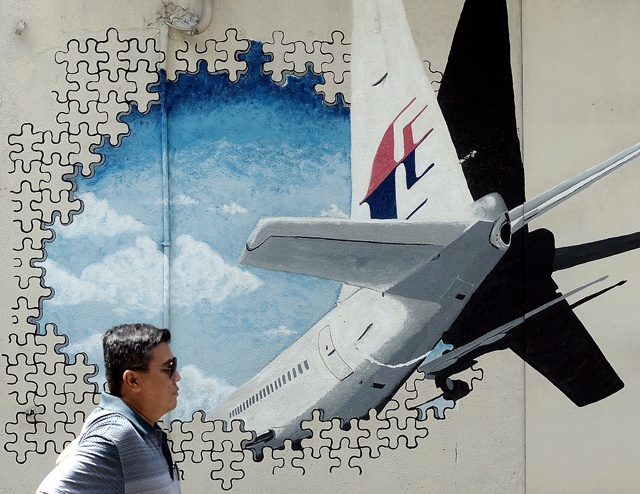 A Malaysian man walks in front of a mural of missing Malaysia Airlines MH370 plane in a back-alley in Shah Alam on March 8, 2016. Malaysia and Australia said they remained "hopeful" of solving the mystery of flight MH370 as the second anniversary of the plane's disappearance arrived March 8 with no end in sight for devastated families. (MANAN VATSYAYANA/AFP)

(AFP) - Investigators probing what happened to flight MH370 said Tuesday the cause of the plane's disappearance remained a mystery as its second anniversary passed with no end in sight for devastated next-of-kin.

The Malaysia-led international team of aviation experts set up to investigate issued an annual progress report, but the brief statement contained no new insights into what caused the Malaysia Airlines jet to vanish.

"To date, the MH370 wreckage has still not been found despite the continuing search in the south Indian Ocean," said the statement.

It was the second straight year that the team of investigators, which includes seven representatives from the likes of the US National Transportation Safety Board (NTSB) and its counterparts, had nothing to offer.

Malaysia and Australia, however, said they remained optimistic that the painstaking search for an Indian Ocean crash site will find something that could lead to the recovery of MH370's flight data recorders, and eventually reveal what caused the plane's disappearance.

"The current search operation is expected to be completed later this year, and we remain hopeful that MH370 will be found," Malaysian Prime Minister Najib Razak said in a statement.

If nothing turns up by the time the scheduled search ends, Malaysia, Australia and China will meet "to determine the way forward", he added, without elaborating.

The jet vanished on March 8, 2014 en route from Kuala Lumpur to Beijing with 239 passengers and crew onboard, mostly Chinese and Malaysian nationals.

Authorities believe the Boeing 777 flew far out over the remote southern Indian Ocean and went down.

A wing fragment later confirmed to be from MH370 was found on an island thousands of kilometres (miles) from the search area last July.

It was the first proof the plane went down, but brought authorities no closer to finding a crash site.

The three nations have already indicated they will end the biggest and most expensive search effort in history if its high-tech scanning of a designated swathe of seafloor comes up empty.

The search zone is expected to be fully scoured within a few months.

Australian Transport Minister Darren Chester echoed Najib's hope that the search can eventually "give answers to the world, in particular the families of missing loved ones".

Next-of-kin, struggling for closure in the tragedy, have pleaded for the quest to be expanded and continued until there are results.

In Beijing, at least 20 Chinese relatives gathered at a major Buddhist temple to pray and read out a statement appealing for an open-ended search.

"Since MH370 disappeared, we family members have suffered day and night, with each day passing like a year. Our longing for our loved ones aboard the plane grows every day," the statement read.

Theories to explain the disappearance include a possible mechanical or structural failure, a hijacking or terror plot, or rogue pilot action.

Many families accuse the airline and Malaysian government of letting the plane slip away through a bungled response, withholding information on what happened and treating grieving relatives insensitively, charges that are denied.

The second anniversary also is the deadline for filing lawsuits against Malaysia Airlines.

Scores of next-of-kin have filed lawsuits seeking damages in recent days in the United States, Malaysia, China, Australia and elsewhere, while others have accepted undisclosed settlements, say attorneys.

Some suits also have targeted Malaysia's government and Boeing.

Malaysia Airlines on Tuesday denied being insensitive toward next-of-kin and promised to honour its "moral and legal obligations".

"(Malaysia Airlines) has never shied away from its commitment to engage with the next-of-kin, and strives in good faith for payment of fair and equitable compensation," it said in a statement to AFP.