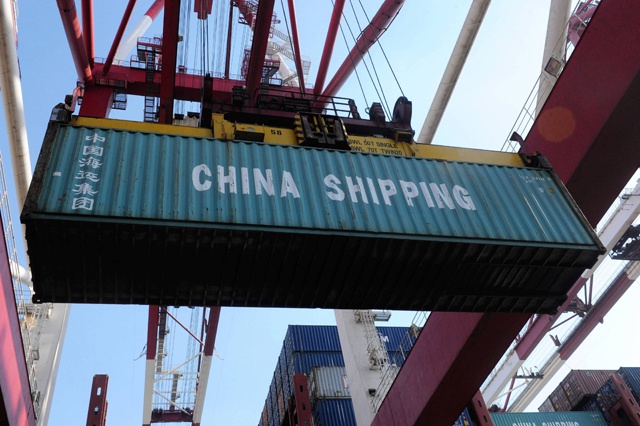 A container is lifted by a crane at the port in Qingdao, in China's Shandong province on February 15, 2016. Chinese trade slumped in January, authorities said on February 15, as both exports and imports tumbled with feeble domestic and global demand dragging on the world's second-largest economy. (CHINA OUT AFP PHOTO)

(AFP) - Oil prices were subdued in Asia Tuesday after Chinese exports saw their heaviest fall in nearly seven years, stoking further worries about the world economy and a supply glut.

China's exports tanked by more than a quarter in February -- the sharpest fall since May 2009 during the financial crisis -- fuelling fears that the world's second biggest economy and top energy consumer was in for a "hard landing".

"It's a signal of the slowing down of the Chinese economy, the largest consumer of energy in the world," said Margaret Yang, market analyst at CMC Markets Singapore.

China is the world's biggest trader in goods and a key driver for world economic growth, but its companies have been battered by weak demand from major markets.

Traders are also waiting for the release later Wednesday of US commercial crude inventories for the week ending March 4, seeking clues about demand.

US inventories remain brimming "but demand has yet to catch up so essentially, the fundamentals are still quite weak", Yang told AFP.

Eyes will also be on production data. Easing US output and talks of a possible production freeze by major producers led by Russia and Saudi Arabia helped push prices higher over the past three weeks on hopes the supply glut would ease.

But some analysts have cautioned against being too optimistic an overall agreement to freeze output would be met.