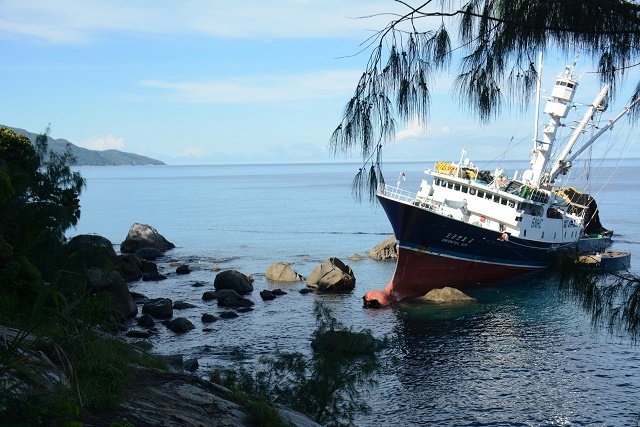 (Seychelles News Agency) - A challenging operation is being planned to free a South Korean-flagged fishing vessel, which has run aground at L’ilot, Glacis, on the northern coast of the Seychelles main island, Mahé, the Port Authority said Wednesday.

The ‘Oriental Kim’ was heading towards Port Victoria when the incident occurred, in the early hours of Wednesday. According to the Port Authority’s Chief Executive, Colonel Andre Ciseau, the island nation’s Coast Guard was alerted at around 3 am.

Giving details about an initial assessment of the situation, the Director-General of the Seychelles Maritime Safety Administration, Captain Joachim Valmont said that all valves have been switched off eliminating the risk of an ammonia leak. He nevertheless confirmed that some minor oil spill has been observed, due to damages the boat has sustained.

“The captain and chief officer informed us that they had transferred the diesel that was in the front tank that has been damaged to the inner tank. There’s 250 tonnes of diesel on the boat, so the priority is to pump it all out and the Coast Guard will also be deploying some booms to contain any oil that has already spilled,” Valmont told SNA adding that removing the diesel will make the boat lighter.

The Seychelles authorities have also been informed that the 'Oriental Kim' is holding around 700 tonnes of fish.

Currently, the rear part of the boat remains in the water, while the front part [bulbus bow], which has come onshore among rocks has suffered some damages.

Captain Valmont said that divers will also be undertaking some repair work on the front part of the boat before the tugs can begin the salvage.

Representatives of the different emergency services including the Ports Authority, Maritime Safety Administration, the police, fire and rescue services have been meeting Wednesday morning to coordinate and plan the operation.

“We are at this point where the [vessel owner's] representative needs to come to us [Port Authority] or ask other companies to salvage the boat. This involves insurance and other risks involved when carrying such an operation,” Colonel Andre Ciseau told SNA.

“We [the Port Authority] will coordinate the operation until we can successfully salvage the boat and if we do not have enough resources we will need to mobilise bigger tugs,” said Ciseau. He noted that the operation should start at around 5 pm and resume early Thursday morning should the first attempt fail, taking into account the next high tides.

It’s not yet known what caused a boat of such size to run aground, so close to the shoreline, which is quite unusual.

“We will be conducting an investigation to determine why the boat had run aground at the said location,” said Valmont.

'Oriental Kim' was carrying 25 crew members including fishermen. There's no reports of any injuries following the incident and only 10 of the crew members remain onboard the fishing vessel awaiting the salvage operation, said Valmont.