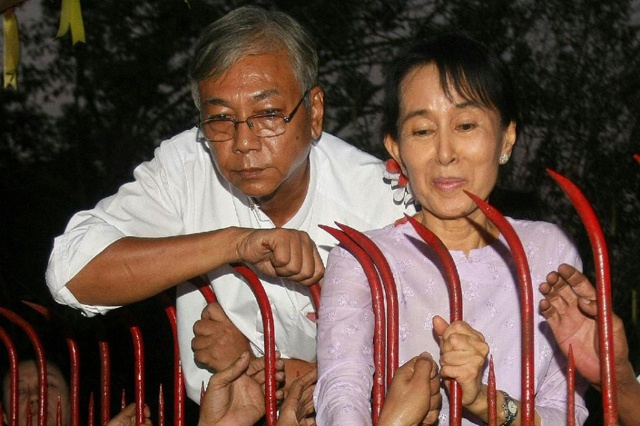 (AFP) - Aung San Suu Kyi's party Thursday nominated her former driver and close aide to be Myanmar's next president, as the Nobel laureate looks to rule her former junta-run homeland through a trusted proxy.

Suu Kyi has vowed to rule "above" the president, despite being barred from top office by the army-scripted constitution, as she strives to fulfil the huge mandate delivered by millions of voters in her National League for Democracy's landslide election victory in November.

The selection of Htin Kyaw, a genial 69-year-old who went to school with Suu Kyi and now helps run her charitable foundation, comes after months of fevered speculation.

Even her own MPs were kept in the dark about the deliberations, with the party fearful of upsetting a delicate political transition in a nation where the military still casts a long shadow.

"This is an important step in implementing the desires and expectations of voters who enthusiastically supported the NLD," Suu Kyi said in a statement published on her party website early Thursday, urging people to support the party's goal "peacefully".

Many in Myanmar have clung to faint hopes that the 70-year-old democracy campaigner could still be named president, but months of talks with the powerful military have failed to remove the legal obstacles in her way.

She is barred by a charter clause that disqualifies anyone with close foreign relatives. Her late husband and two sons are British.

"I would like to propose U Htin Kyaw, from the NLD," said Khin San Hlaing, a lower house MP for Suu Kyi's NLD, which will also nominate another candidate from the upper house.

Though Htin Kyaw is almost certain to clinch the nomination with backing from the NLD-dominated parliament, his official confirmation may take days.

Two other candidates will be put forth -- one from the upper house and the other from the military, which still controls a quarter of the legislature.

A final vote of the combined houses will then determine which will become the president, leaving the other two as vice presidents.

Htin Kyaw is considered as a smart choice by Suu Kyi and her party.

The affable economics graduate, who acted as a driver for Suu Kyi in brief spells of freedom from her long years of house arrest, has the democracy movement in the family.

He is married to sitting NLD MP Su Su Lwin, whose late father was the NLD's respected spokesman.

Neither he or his wife attended the parliament on Thursday.

Myanmar historian and political analyst Thant Myint-U said Htin Kyaw was a "stellar choice" who had "unimpeachable integrity" in a tweet soon after the announcement.

Online comments reacting to the announcement were generally positive.

"We have waited a long time to see an educated president for Myanmar. And now he and Mother Suu will lead the country together," said Thiri Khinsanar in a post on a local news website.

Suu Kyi has not outlined what her precise role will be or how she will be able to play puppet-master to a president.

Some have suggested she could mimic India's Sonia Gandhi, who wielded huge influence over her Congress party's administrations despite having no official government role.

There has also been speculation that she could take the role of foreign minister, which would give her a cabinet post as well as a seat at the country's influential military-dominated security council.

But under Myanmar's complex political system, this would mean ceding her party role.

Having tasted new freedoms in a nation recently released from the shackles of military oppression and international isolation, millions of voters are eager to see further changes that were Suu Kyi's central election promise.

Suu Kyi has vowed to create a government of national reconciliation and the cabinet is expected to contain figures from across the political spectrum.

But the key challenge will be to maintain smooth relations with the army, which controls the key home, defence, and border ministries.

The former ruling generals held Suu Kyi under house arrest for 15 years and swatted away the NLD's 1990 election landslide.

Thein Sein's quasi-civilian government has ushered in a raft of political and economic reforms that saw most sanctions lifted.