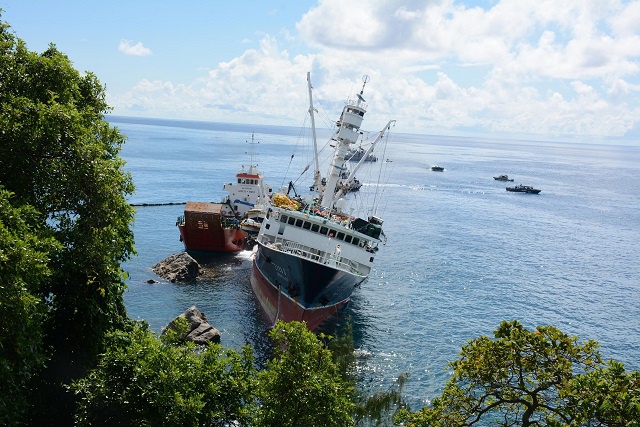 The South Korean-flagged 'Oriental Kim' remains aground for a second day as the Seychelles authorities continue planning and attempting the salvage operation.(Patrick Joubert, Seychelles News Agency)

Officials are closely monitoring the wreck for any fuel spills that could stain nearby beaches. So far no major spills have occurred.

The salvage work was to take place at high tide in the early evening despite heavy rainfall, said the chief executive of the Port Authority, Colonel Andre Ciseau told SNA.

The vessel, Oriental Kim, which is carrying a load of around 700 tonnes of tuna, has suffered damage to its front after running aground and hitting some rocks at L’Ilot Glacis, on the northern coast of the Seychelles main island, Mahé, in the early hours of Wednesday.

Work to empty some 250 tonnes of diesel from the stranded boat, as well as the installation of booms to contain some minor oil spill visible at the scene of the accident, started on Wednesday.

“We’ve been experiencing the strong smell of diesel and even the kids were complaining of headaches and being nauseous,” a resident of the nearby area, Avrina Daro, told SNA.

The Director General for Waste, Enforcement and Permit in the environment ministry, Anette Laure, who was at the site of the accident Thursday morning, told SNA that officials have a team on standby monitoring the situation, as the priority is to prevent any negative impact on the coastal environment including the beaches.

“We have visited the coastlines from Glacis to Beau Vallon and Belombre to monitor the situation. We have also been to several tourism establishments just as a precautionary measure to advise their clients not to go swimming in the area close to where the boat is currently stranded,” Laure said to SNA.

Fishermen have also been advised not to lay their fishing traps nor frequent the area where the salvage operation is ongoing.

According to the Director General of the Maritime Safety Administration, Joachim Valmont, plans to lighten the boat on Wednesday by removing the 250 tonnes of diesel onboard was not entirely successful due to several difficulties encountered.

“We only managed to remove 100 tonnes of the diesel,” Valmont told SNA.

“This afternoon we will have two more skiffs assisting the two tugs which undertook the operation on Wednesday,” said Valmont adding that efforts to lighten the boat a bit more will also continue by getting rid of the brine, a mixture of salt and water used to keep for fish storage, and fresh water stored onboard the vessel.

Ciseau said that should Thursday's attempts fail, the team will watch out for other high tides to try again until the boat is back in the water.

He added that the team remains ‘optimistic’, although every precaution has to be taken to ensure that the boat does not suffer more damages or sink, as well as to eliminate other risks including further pollution and fear of a possible ammonia leak.

“The way we are carrying out the operation, there is no risk that any of the ammonia structure onboard will be damaged. We are having technical meetings before and after every operation where all of these risks are addressed,” said Ciseau.

The chief executive of the Port Authority says officials are studying all proposals being put forward of how to go about freeing the boat before making a decision. This includes one idea to use explosives to break the huge rock where the boat is currently stuck, and bringing in a bigger tug also remains a possible option, says Ciseau.

The ‘Oriental Kim’ was heading towards Port Victoria with its crew of 25 onboard including a Seychellois national when the incident occurred. An investigation to determine how the boat went off course and run aground is ongoing.