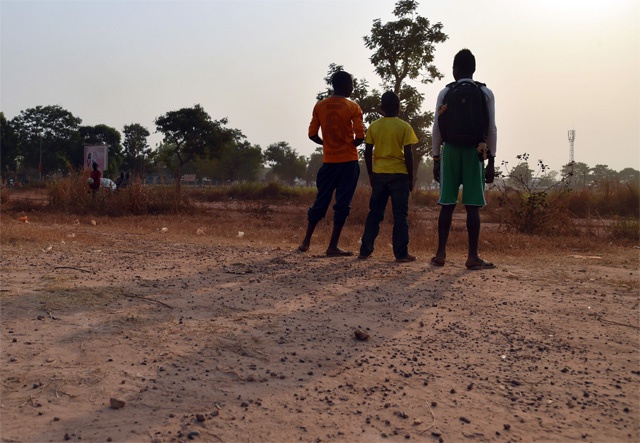 Three children living in the Internally displaced people (IDP) camp of Mpoko and claiming to be victims or witnesses of sex abuses on minors by peacekeepers soldiers of Sangaris operation pose on February 11, 2016, in Bangui. (ISSOUF SANOGO / AFP)

(AFP) - The UN Security Council on Friday adopted a resolution that calls for the repatriation of entire peacekeeping units whose soldiers face allegations of sexual abuse while serving under the UN flag.

It was the first time that the council has approved measures to address the rise in troubling allegations of sexual abuse by peacekeepers deployed worldwide to protect civilians in conflict.

The US-drafted resolution was adopted by a vote of 14 in favour, with Egypt abstaining.

The resolution, which has been under intense negotiation for a week, endorses a new UN policy of sending entire peacekeeping units back home if their soldiers face repeated allegations of sex abuse.

The measure allows UN Secretary-General Ban Ki-moon to bar a country from peacekeeping if it fails to take action against soldiers who face credible allegations.

Foreign troops found guilty of sex abuse "do not deserve to serve in UN peacekeeping missions," US Ambassador Samantha Power told the council.

"To the victims of sexual exploitation and abuse, we pledge that we will do better," she said.

"We will do better to ensure that the blue helmets we send as your protectors do not become perpetrators."

Egypt, along with Russia and Senegal, had argued that the new policy amounts to collective punishment and that attention should focus on prosecuting individual perpetrators of sex crimes.

Minutes before the adoption, Egypt presented an amendment that would have added criteria for deciding on a repatriation, a move Power said would have "undermined the purpose of the resolution."

That amendment was backed by Angola, Russia, China, Egypt, Venezuela but it fell short of the nine votes needed for approval in the 15-member council.

Egyptian Ambassador Amr Abdellatif Aboulatta said the resolution will "negatively affect the morale of the troops and demonstrates contempt for the sacrifices of tens of thousands of peacekeeping personnel operating under extremely difficult conditions."

Egypt argued that it was up to the UN General Assembly, and not the Security Council, to take action on issues of discipline in UN peacekeeping.

Concern has been growing since the release of a UN report showing a rise in the number of allegations of sexual abuse and exploitation by peacekeepers in 10 missions, from 52 in 2014 to 69 last year.

Cases of child rape by UN peacekeepers in the Central African Republic have been particularly damaging, prompting Ban to fire the mission commander in August, but the allegations have continued to surface.

Under UN rules, it is up to the country that contributes the peacekeepers to investigate and prosecute any soldier accused of misconduct while serving under the UN flag.

The United States had argued that too often, countries fail to investigate after they are notified by the United Nations of credible allegations against their troops.

A total of 122 countries contribute 125,000 troops and police to the UN's peacekeeping missions worldwide.