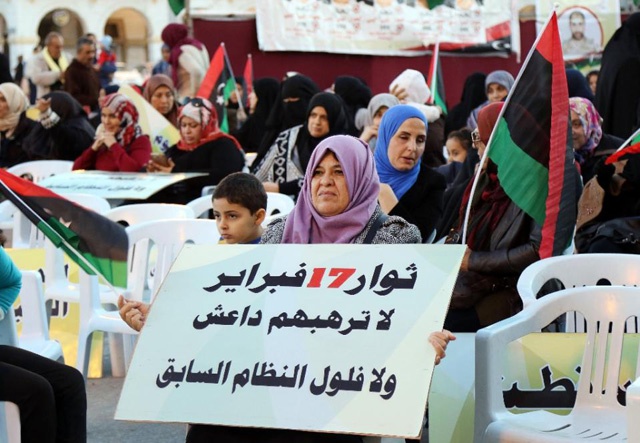 Despite the protests of Libyan citizens, intetrnationally recognised parliament lawamkers said they supported a unity governemnt backed by the UN (AFP Photo/Mahmud Turkia)

(AFP) - Libya's UN-back unity government announced Saturday it was taking office despite lacking parliamentary approval, saying that a majority petition signed by lawmakers was equivalent to a vote of confidence.

In a statement, the presidential council headed by premier-designate Fayez al-Sarraj urged institutions "to immediate make contact with the unity government in order to organise the modalities of passing over power in a peaceful and organised way".

It also urged the international community, international and regional organisations -- including the UN, Arab League and the Organisation of the Islamic Conference -- to "cease any relations with executive authorities not linked to the unity national government".

Libya has had two rival administrations since mid-2014 when the recognised government was forced from Tripoli after a militia alliance including Islamists overran the capital.

Last month, 100 lawmakers from the internationally recognised parliament said they supported a UN-backed unity government but were "forcibly prevented" from putting a new reduced cabinet line-up to a vote of confidence.

The administration based in the country's far east previously rejected a line-up of 32 ministers in January.

A UN-brokered agreement in December between representatives of the rival parliaments provided for a power-sharing government to be based in Tripoli.

Western countries have agreed that military action is needed to dislodge IS from Europe's doorstep, but world powers want a national unity government installed to request help before formally intervening.